IWD: Mercy Johnson, Korra Obidi, Funke Akindele, Other Celebrities Breaking the Career Bias, International Women’s Day is a special day set aside to celebrate and highlight the efforts of women around the world, not limited to also pointing out their struggles. 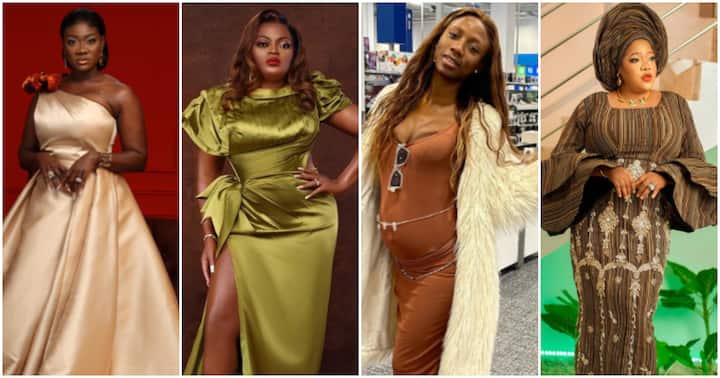 It’s unfortunately quite widely believed that a woman who has her career going great for her will not be able to control the affairs in her home not to talk of raising her kids.

Just like many women, Nigerian celebrities have proven the theory wrong and have even gone as far as combining motherhood with their careers instead of abandoning their dreams.

Here is a list of a few women who are winging motherhood, forging ahead and on top of their careers.

The actress and filmmaker have been known as a hard worker and even when her twin boys arrived, it didn’t stop her zeal.

Despite being a mum, Funke produced her Omo Ghetto The Saga movie and even went on tour to promote it.

In some cases, the actress has been sighted with her kids in the field of work and it does not stop her from delivering her best.

The mum of four is a vivid example of breaking the bias in her career seeing as she has to go to locations even though she has not just one child to look after.

Another great example was when Mercy left all she was doing to fight for her first child in school against a teacher who didn’t like her.

The actress also takes out time to attend her children’s school activities and even spares time to play with them.

Tomike is a media personality who has been well commended for juggling her job and her 8-month-old baby.

For every time the actress has to work outside the country, she takes her beautiful baby with her.

Tomike is definitely proof that having kids should not stop one from career progression.

Korra Obidi is a professional dancer who just welcomed her second child with her husband, Justin a few weeks ago.

For Korra, not the first or second pregnancy stopped her from doing what she loves the most, dancing.

Up until delivery, the mum of two still showed off her dance moves, a gesture that got many people worried for her.

Mummy Ire as she is fondly called is also one actress who has not let taking care of her child or running her home stop her career growth.

The filmmaker has worked on and released projects since she became a mum and has even won awards while at it.

Toyin has also been identified as one who carries her husband on her head regardless of her work situation.

First, Uche was critiqued for getting pregnant for her boyfriend outside wedlock, a stigma she had to face till her daughter arrived.

Despite having a baby in her hands and another older child, it has not stopped the actress from going to movie sets and locations.

Just like others, the mum of two has proven that she can be a mum and pursue her career at the same time.

Not only is Adesua still breaking grounds after the birth of her son, but she has also now moved on to be a musician.

Despite holding the forefront of her home, the actress is also breaking into the music industry.

If this isn’t the definition of inspiring.

The arrival of her first child has not stopped the thespian from carrying on with the craft she has spent years building.

The actress has continued to work as well as live her best life. She has also been going outside the country to work with her son.

Lala is one of the few celebrities who opened up about the struggles of pregnancy and being a new mum.

These women and many more on this list are proof that one doesn’t have to put an end to a dream because of kids or family. There is always room for that work-life balance.

Also, choosing to take time off to focus on family or your children doesn’t make you less successful or efficient than these women.