Junior Pope, others gush over actor’s son as he speaks Igbo fluently in school 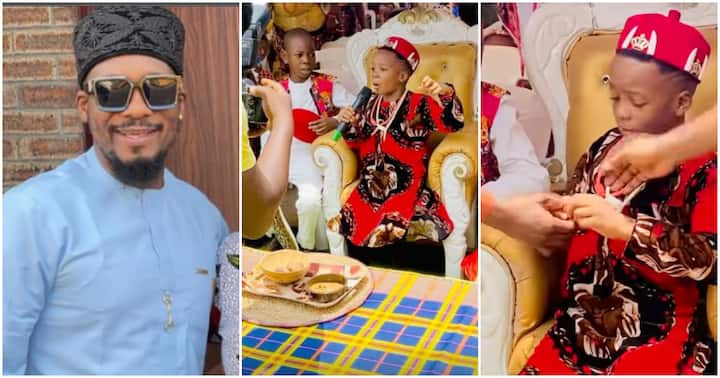 Taking to his official Instagram page, the movie star shared a clip of one of his sons participating in an activity at his school’s cultural day event.

The little boy was decked in an isi-agu attire, complete with a red cap and beads around his neck. He also sat on a throne-like chair while praying in Igbo language.

The little boy then proceeded to give the popular ‘Igbo kwenu’ chant while people in the audience responded to him. The actor’s son then ‘broke the kola’ as the crowd cheered him on.

It was no doubt a very touching moment for the boy’s movie star father, Junior Pope, who noted that he would not have missed the event for all the scripts in Nollywood.

“I wouldn’t miss this day for all the scripts in Nollywood….My boys made me proud…….”

See the lovely video below:

Junior Pope’s celebrity colleagues and fans gush over the video

Not long after the actor shared the video of his son online, numerous stars and fans trooped to his comment section to gush over the little boy. Read some of their reactions below:Mercyjohnsonokojie:

“This is beautiful, it’s the forgetting of the Kola-nut for me.”

“Awww so cute to watch.”

“This is nice … at least the children will know their culture. Their father was born in Cameroon, raised in Congo before they brought him to Enugu as a prodigal that year.”

“He didn’t only make you alone proud, this goes entirely to all the igbo people across Nigeria and many parts of the world, the African culture shouldn’t have been neglected for whatever reason to think that the white man’s culture is supreme.”

“wawooo this is the best thing i have seen on Instagram since 4years.”

“So soothing to watch….. Training a child isn’t for the faint hearted.”