Nigerian Kid who was saved by a kind man has worn a mathematics award barely one year after being picked off from the street and sent to school. In 2021, a story of a kind man, Tunde Onakoya who took a little boy who always picked scraps from a slum in Ikorodu off the street and enrolled the kid in school went viral. 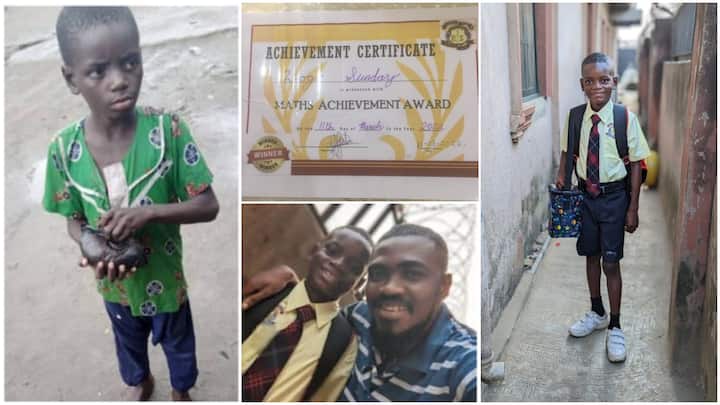 Barely a year after the transformation, the little boy has proven that sometimes what most people need in life is a helper.

The kid has been awarded a Mathematics Award for his great achievement in school, @mrmadoika revealed on twitter.

Reacting to the good news, some Nigerians on Twitter were amazed at how the child’s life completely transformed, saying it is a good example of how opportunities can change lives.

Below are some of the reactions to the amazing story:

“So this little kid that was roaming around picking scraps without any help is a math genius.. thank God you located him.”

“So the little kid that was roaming picking up scraps was a math genius… Life’s so unfair!”

“Wow! Congratulations to him, God bless you both.”

“Thank God for this, imagine the destiny that would have been wasted.”

“All some people lack are opportunities. This kid is a clear example. May he grow up to be great.