KWAM 1 at 65: Mercy Aigbe Goes Down on Both Knees to Greet Singer at Birthday Party, Gifts Him Huge Cake, Top Nigerian actress, Mercy Aigbe, alongside many other important guests graced the occasion of Fuji maestro, KWAM 1’s 65th birthday party. 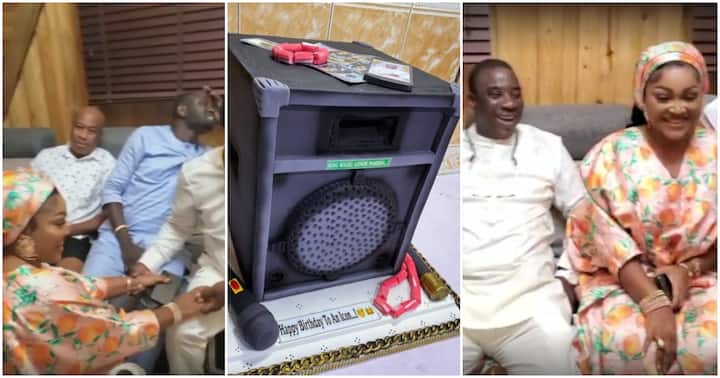 King Wasiu Ayinde Marshall (KWAM 1) clocked 65 on March 3, 2022, and the occasion was celebrated in a special way.

In a video making the rounds online, Aigbe was captured as she arrived at the party and paid her respects to the Fuji star.

The actress went down on her two knees to greet Wasiu who later helped her up and directed her to sit beside him.

Not stopping there, KWAM 1 also sang praises for her and her husband, Kazim Adeoti. The actress made sure to greet the singer’s newest wife, Emmanuella, by hugging her sweetly.

The Nollywood actress did not attend KWAM 1’s birthday party empty-handed as she went bearing a gift.

The movie star had a customized and realistic looking speaker cake made for the Fuji legend.

The cake was made to look like a black speaker that had red coral beads, a phone, and some dollar notes on top of it. It also had a microphone and staff beside it.

According to Aigbe, the cake is befitting for a king.

“Cake befitting for only a King @kingwasiuayindemarshal , more Grace sir .”

“Fine cake for a fine woman.”

“Wow this is beautiful.”

“That man can sing sha, even without beats he sounds so good.”

“So beautiful to watch ❤️.”