Lady Causes Stir Online as She Flaunts Huge Wads of Cash She Got from a Single Ushering Job in Video, A Nigerian lady’s job success celebration has ignited a serious debate on social media. 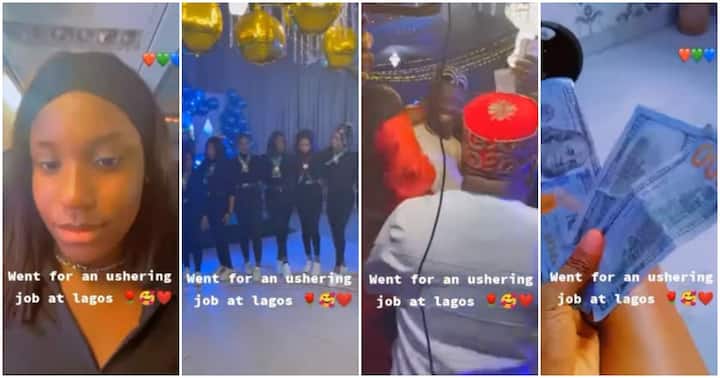 The proud lady who claims to work as an usher at events flaunted th ehge wads of cash she made from a single ushering job in Lagos.

Doing her showcase in a story format, the lady captured her activities in various videos that were made into one.

In the summed up video of her activities on Instagram, the lady is seen aboard an aeroplane as she set out for the job.

In another scene from the event proper, her and other ushers stood in a line. The following scene shows guests on the dance floor making merry.

The concluding part of the video then shows a hand with three dollar notes and wads of cash pilled up in a corner.

“I don’t know what she’s trying to preach with this video, is it that she was tipped? Or was that her wages? Which ever way, Let’s try to get our contents right and the kind of impression we throw out there, Howerver, Ushering job is a legal and responsible job which I have done over the years.”

“Ehn en??? Wowwwww.. Someone will see you inside ofurufu going for ushering job now and be thinking ushering job is the truth.. E murasi.”

“Me that did ushering wells in school, it’s impossible to pay that much. She did usherin and hook*up.”