Lady wrestles Omah Lay to the ground, lays on him during performance in Sweden

Female Fan Forcefully Pulls Omah Lay Down, Lays on Him While Performing on Stage in Sweden, Nigerians React, The cases of female fans molesting male singers continue to be on the rise as Nigerian star, Omah Lay emerged as the latest victim of such an act. 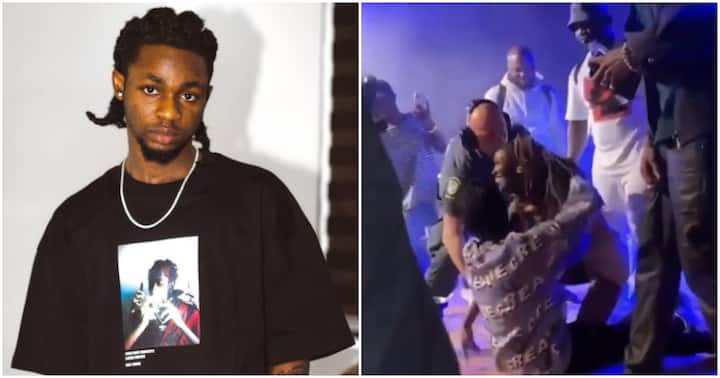 The singer who is on a European tour went to Sweden to thrill his fans as something unexpected happened during his performance.

While he is performing, a young lady walked up to the stage and ensured she rough handled him to the ground and also laid on top of him during an awkward moment.

In the short video that emerged online, the young lady walked out of the stage fulfilled with a smile.

Social media users have reacted differently to the video of a female fan who molested Omah Lay in Sweden.

“Omah only you them they jump on since . Okay o we believe you.”

“Na wetin I go do if I see Kizz Daniel like this.”

“Nigeria guys no worth this kind thing abeg.”

“Things artists see are beyond their eyes.”

Take my card: Adekunle Gold tells Simi to buy a new bag for her birthday