A mother and model, Tatiana Elizabeth Price, has generated massive reactions online after posting a video of her trying to join the #BussItChallenge. 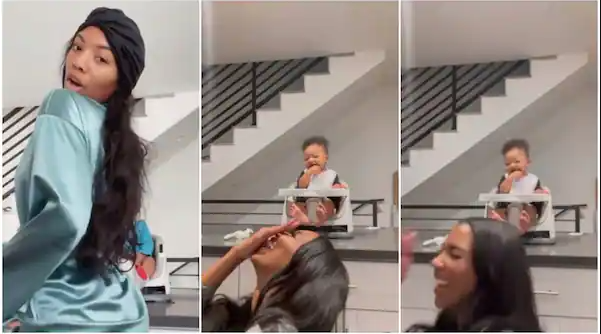 As the mother was about showing her banging shape and twerking, her baby burst into uncontrollable laughter in a video that has been seen over one million times.

The mother joined in and turned what would have been a proper twerking video into a comedy show.

Captioning the video on Twitter, the mother said that she finally joined the #BussItChallenge, hinting that the result was the opposite of what she had planned.

As at the time of writing this report, the video has got over 160,000 likes from people who found it quite funny.

we compiled some of the reactions below:

“Awwwww this is so adorable. My wife and I are about to have our first child in a week. I hope he enjoys watching mom and dad clown and laughs like this.”

“The moment you’re SURE you don’t like/want kids, you find a cute one! I SWEAR!”

Little Girl Displays Amazing Skills as Dad Throws Her in the Air, Many React to Viral Video