Man who has Been Wearing Everything Yellow for 40 Years Surfaces, Shows off His Colourful House in Video

Man who has Been Wearing Everything Yellow for 40 Years Surfaces, Shows off His Colourful House in Video, Yellow is the most luminous of all colours of the spectrum, but it is a fashion style for Abu Zakur of Syria. 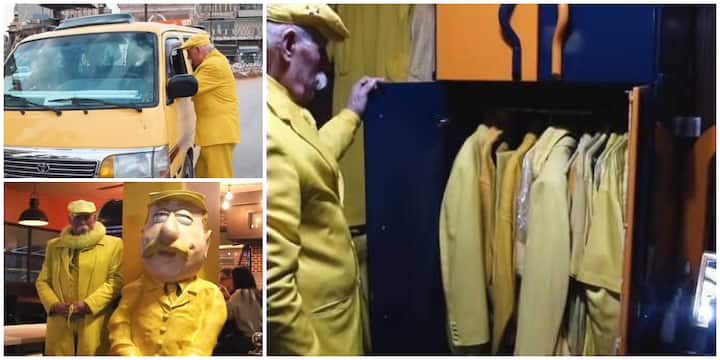 It is, in fact, more than a fashion style as the Aleppo resident has been known to adorn everything yellow for the past 40 years.

Why he wears only yellow

Abu’s fashion style has turned him a celebrity in his community with people stopping him for selfies whenever he is spotted in public places.

In an interview with Nas Daily, Abu revealed that he chose the colour yellow because it symbolises joy and happiness.

Abu seeks to spread happiness in people with his dress style. And he seems to have achieved more than that aim as his community has a statue of him.

He has been attacked for his style

While he showed off his abode where the clock, items and even his underwear are all yellow, it is reported that he had been attacked by people who warned him to stop putting on yellow. A warning he has ignored repeatedly.

For his skin and facial look, Abu has drawn comparisons with ex-US President Donald Trump.

While he is not bothered by this comparison, it is his earnest hope to be featured in the Guinness Book of Records some day.

“I’m really into yellow, you always look younger and more dynamic when wearing this colour. But I think when you live in a tropical country, it isn’t always make comfortable feeling to another’s when you wear this colour all the time, particularly in summer. However, i feel that this man is so cute and helpful because he brings a lot of positive energy to others.”

“I am from Aleppo. Never once did I see this man in clothes other than yellow , every person from Aleppo knows him or at least heard about him , as he is a part of the city.”