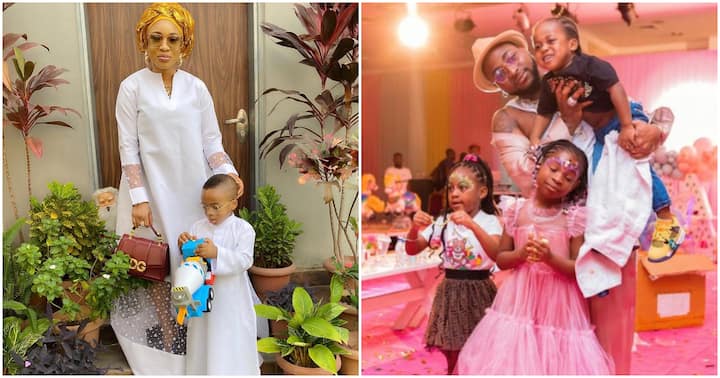 The movie star and Andre sparked mixed reactions online after a video clip where the little man was seen tapping his mother’s backside.

Tonto had simply laughed off her son’s actions and hilariously noted that he wants to burst her N5 million ‘bumbum’.

Well, netizens are not taking kindly to the video as they questioned the actress’ method of parenting.

“Many single moms are like Tonto Dike. They spend half their adult & mid-lives complaining about ill-mannered, irresponsible & badly behaved men, they want to overcompensate for the lack of a father figure in their children’s life and they end up raising the same men they loathed.”

This is why Tonto Dikeh is talked about so much this morning pic.twitter.com/14PXac4iTC

Amid the drama, another Twitter user returned to social media with an old video from Davido’s daughter’s birthday months ago.

The viral clip captured the moment the 30 BG musician stopped his daughter from shaking her backside.

Sharing the clip, he wrote:

“As regard Tonto’s allowing her son to spnk her a*s, see Davido here stopping his daughter to stop twerking. This is exactly what we are saying. The difference is clear…”

As regard Tonto’s allowing her son to spank her ass, see Davido here stopping his daughter to stop twerking. This is exactly what we are saying. The difference is clear… pic.twitter.com/rcgeFkwoZx