Maria, 4 other BBN Shine Ya Eye stars who have remained relevant on social media

The BBNaija Shine Ya Eye show has been over for some months but fans have already begun anticipating the Reunion show as they hope to relive dramatic moments from the program. 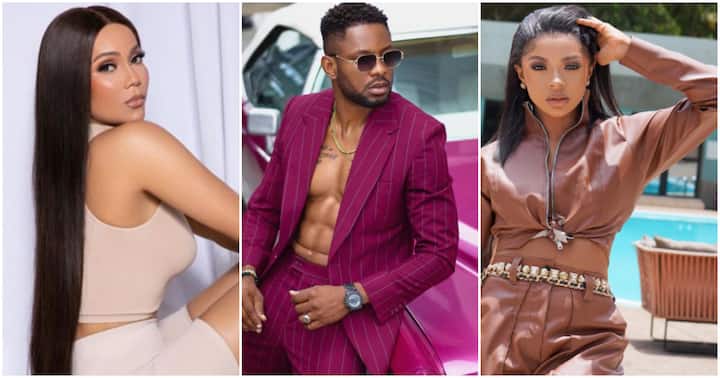 During the many months of the show not airing on television, some of the housemates kept the buzz alive with their activities on social media.

These stars kept fans glued to their pages as they feasted on information on how they were faring after the show.

Today, We will take a look at some BBNaija Shine Ya Eye stars who continued to give fans a show on social media.

This is one housemate that had a lot of potential on the show. However, she got evicted early but her fans seemed to remain loyal to her and continued to grow. Maria has continued to remain relevant online with some of her actions and controversial comments on social media. The young lady trended a while ago after it was claimed that she was dating a married man named Kevin. After Kevin’s identity was revealed, ladies started to gush over his handsomeness and it was later discovered that he was separated from his wife.

This is one SYE star who was already relatively famous even before she went on the BBNaija show. Liquorose’s fans stayed true to her and she was one of those who received a lot of mouthwatering gifts from them including a Mercedes Benz. Her relationship with her co-star, Emmanuel, also kept her name on the lips of people.

This housemate trended online for many reasons even after the end of the BBNaija show. Sometimes, her mode of dressing made her the topic of discussion. Also, her young parents also influenced her being in the news with their social media posts. Just recently, Angel’s former social media handler called her out for owing fees and revealed how the housemate connived with her fans to attack her co-star, Saskay and also make negative comments about Maria.

Whitemoney was the winner of the SYE show but his popularity seemed to diminish after this. Perhaps this has to do a bit with his decision to go into music, a move that earned him criticism from his detractors. The young man however remains undisturbed by negative comments and recently promised to bring home the Grammys.

This is one controversial housemate from the SYE season of BBNaija. Cross has been involved in love triangles among other things. The reality star, whose mother happens to be a pastor, was gifted a bible after his mother announced that she was making him an ambassador of her ministry. Interestingly, just a few weeks after that, a photo of Cross unclad in the bathroom went viral on social media and his nether region became a trending topic.

Is that your final answer? Reactions as kid picks N50 notes over N1k in funny video