We Are Tired of Fighting, BBNaija’s Mercy Eke and Tacha Sit Side by Side in Rare Video As They Reunite, Each season of the Big Brother Naija (BBNaija) reality show sees two housemates who go on to become rivals of sorts—Mercy Eke and Natacha Akide were these individuals in the fourth season of the show. 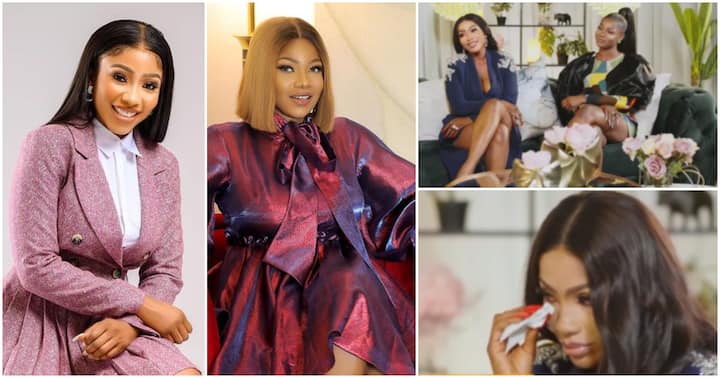 Years after their exit from the house, it appears the ladies are finally putting the past behind them as disclosed in a recent interview with media personality, Toke Makinwa.

A preview of the show, Talk with Toke Makinwa, captured the ladies sitting side by side and this has sparked several reactions from members of the online community.

It wasn’t enough that they sat together as Mercy, winner of the Pepper Dem season, mentioned that they are tired of fighting and even shed tears in a portion of the video.

Tacha, on the other hand, was heard saying: “we don’t have to do what you guys want us to do.”

Watch the preview as sighted online below:

“These two queens are do amazingly well and it’s funny and sad how some fans fight on top their matter, these beautiful ladies are cool OK? So some of you should rest.”

“It’s about time. They really should reconcile it’s been three years.”

“Weeewuuuu !!! That’s why I no Dey put mouth for online bants , they’re both winning so shame on those miserable fans Always putting them up against each other.”

“Both are glowing respectively in their different skin tone❤️.”