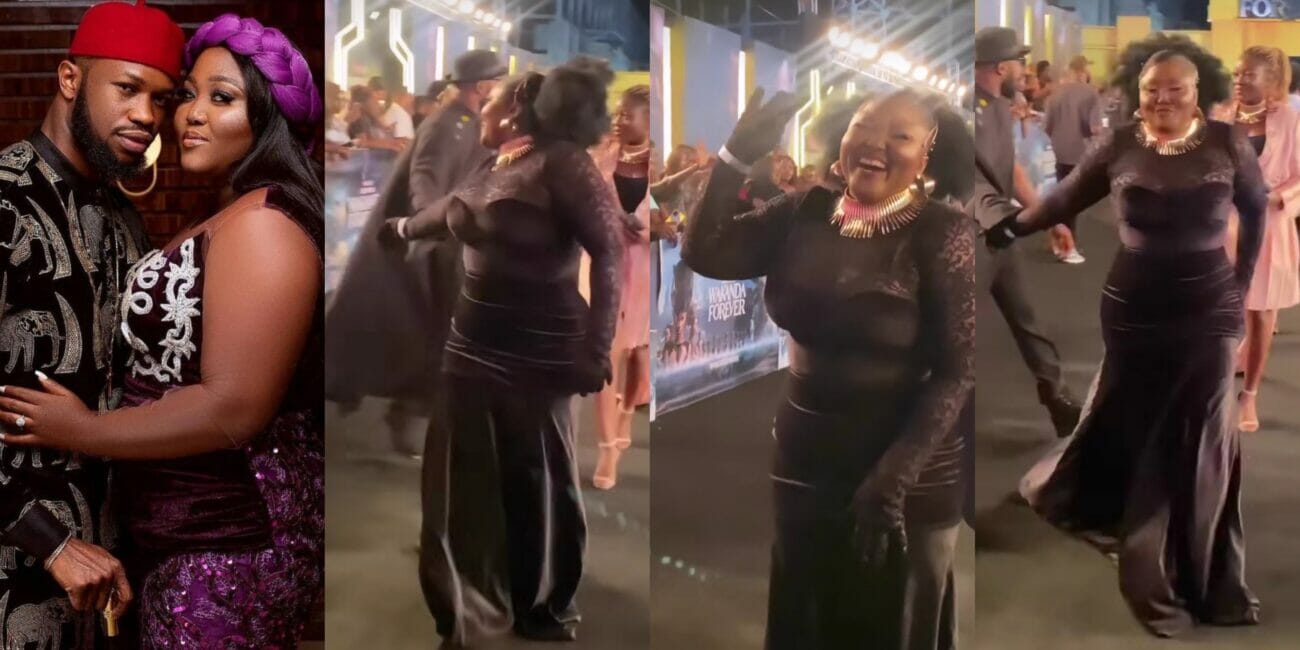 Nollywood actor, Stan Nze is currently under fire for turning down his wife, Blessing Obasi at a public event.

The actor has stirred reactions after a video of him rejecting his wife’s hands at the Wakanda Forever premiere made its way rounds.

Kemi Filani news reported that it was a star studded affair on November 6th, as Wakanda Forever premiered in Lagos. A resurfaced video from the event, which is fast making rounds, showed actor Stan rejecting his wife hands, as he attended to an unknown lady. Blessing Obasi had stretched her hands towards him, and the actor rejected it and focused his attention on a lady.

The video has left many slamming the actor for being disrespectful.

One Abosewu Ese wrote, “Yes he was, or maybe they just had a fight. We can never tell.

One Goe Vibe wrote, “Forget na this girl hold this marriage, anyday she is fed up it’s over! Stan is not really into her

One Trixie hair dynasty, who affirmed that the video was disrespectful wrote, “I thought I was the only one that saw that. I’m sure she didn’t find it funny but she had to cover up. I love them both but sometimes nnewi men sabi do some things wey dey vex person but I’m sure they’ve sorted themselves out

One D blessed bae wrote, “They had a fight and this is normal. Why she go gree make them settle inside house and now she want make them pose for the camera

One Extraordinary woman wrote, “Those of you saying you can’t see the disrespect after even watching once can’t even deal. Mtchewwwwww.

One Vivi Unusual wrote, “If you do not love or respect her, why did u marry her. Marriage is becoming more scary and awkward these days. Celebrity couple isonu

Months back, Stan Nze had made a shocking revelation on his marriage to colleague, Blessing Jessica Obasi.

The actor and his wife marked their first anniversary and Stan Nze had opened up on how things went that day.

While their fans thought that their day was a joyous one and was worth celebrating, it was the opposite for the couple.

Stan Nze revealed that he and his wife were in different moods as they had argued.

The actor, made this known in an interview with, TVC’s Black Table. Stan disclosed that the major fallout between him and his older wife was because they had argued and neither was ready to compromise and as such, the two had attended church sour despite it being their anniversary.

Stan Nze noted how he looked unhappy in the video which went viral.

For him, he couldn’t fake his unhappiness and pretend that all was well between them.

To cover up, his wife attributed his soured mood to being emotional and he felt sad knowing he couldn’t say the truth.

“The times me and my wife have had like some fall out is because you know you dey vex, I dey vex, I no gree today.

On our anniversary day, we went to church without….we weren’t talking. We got to church and apparently we had a community of fans who came with money cakes, tray of foods outside yeh church. Me I was saying I am late, I wasn’t in the mood. She posted the video and I couldn’t fake it, I wasn’t happy. My wife pretended that I was emotional but the truth is we weren’t talking”.