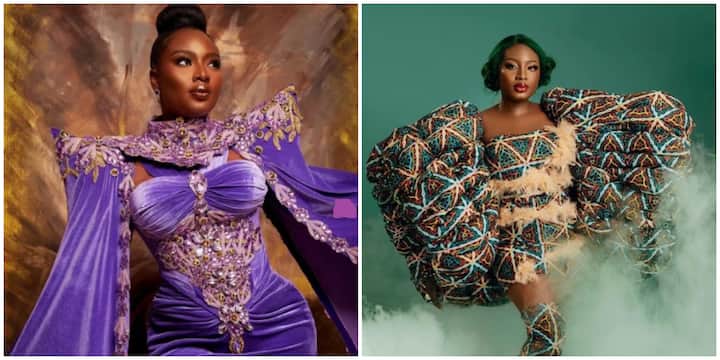 The actress who is married to fellow movie star, Lateef Adedimeji, left no stones unturned when she had her birthday shoot.

takes a look at all four outfits – two of which were carefully put together by CEO Tiannah Empire, Toyin Lawani.

Check them out below:

Mo Bimpe donned a gorgeous baby blue Victorian dress with bell sleeves. The huge ball gown featured a sweetheart neckline in white, coordinating with the lower part of the sleeves.

For her hair, she rocked a royal updo and finished the look off with an elegant tiara.

This was the first set of photos released for her special day.

Bimpe who celebrated her first birthday as a married woman, paid homage to her Islamic religion as she donned a white ensemble with gold embellishments.

The caped dress which came with a coordinating headpiece gave her a regal look.

Sporting this ensemble, she looked like the perfect Muslim bride.

For her third look, the actress opted for a lilac look, sporting a high bun updo.

The dress featured appliques and stone embellishments, detachable exaggerated long sleeves which she removed for the second photo.

She rocked a natural shade of makeup keeping the drama on just her dress.

The outfit featured huge detachable sleeves which she removed in the second slide to show off her curves in the tube mini dress.