Mr Macaroni screams after giving his phone to a lady to transfer amount she wants and she enters a N1million, Popular Instagram comedian, Mr. Macaroni, has shared a video which captured his hilarious reaction when a lady he gave the liberty to request any amount from him, went overboard with her request. 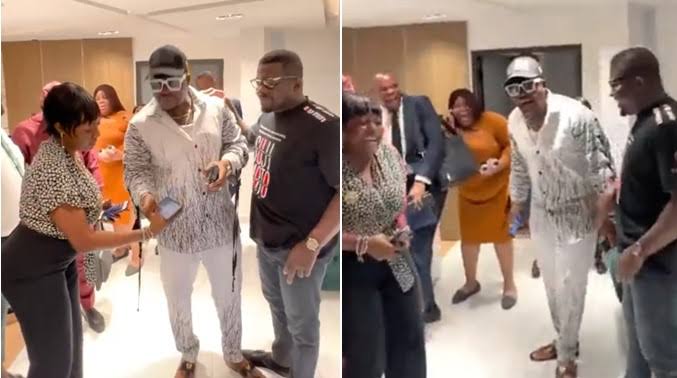 Lekki residents on Wednesday, March 30, met over the planned reopening of the tollgate and resumption of tolling at the Ikoyi bridge. After the meeting, Mr. Macaroni decided to have some fun with some of the people who were present at the meeting. He gave his phone to a lady and asked her to put in her account number, just like he does in his skits. The lady, who saw it as an opportunity to make some money, quickly took the phone from him and entered 1 million Naira.

The comic act was taken aback when he saw the amount she inputted, Macaroni, however did not approve the 1 million transfer, rather, he sent her N200,000.

Sharing the video on his Twitter handle, he wrote, ”Haaaa! 1 Million Naira?? How much is my net worth?