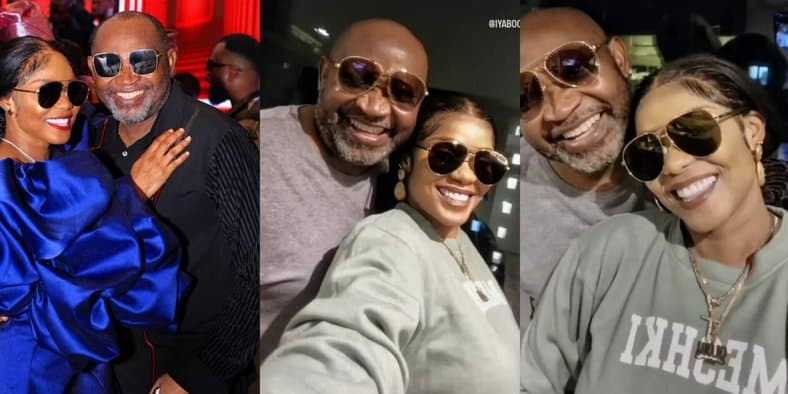 It is an exciting time for Nollywood actress and entertainer, Iyabo Ojo who has found love again in the hands of an Igbo man, Paul Okoye.

To celebrate her 45th birthday today, December 21st, Iyabo Ojo went Instagram official with her boo, Paul Okoye. The actress confirmed the reports that she is dating businessman, Paul Okoye.

Kemi Filani news reported that Iyabo Ojo hinted at being in a relationship during Season 1 of Real Housewives of Lagos.

However, the mother of two didn’t say much about her relationship till last month, November, when she revealed that she has fallen in love with an Igbo man.

The screen goddess in an Instagram post, credited her mystery lover for her glowing skin and happiness.

She stated that she had finally been captured by an Igbo man.

Appreciating him, she thanked him for loving her so much and for lifting her spirit.

“Thanks Obim for loving me so much & lifting my spirit…. Chai this Yoruba girl’s heart had finally been captured by an Igbo man”.

Who is Iyabo Ojo’s lover?

Just few days back, the identity of , Iyabo Ojo’s new lover whom she has been praising and whining about for a while now, had been revealed to be Paulo Okoye.

Kemi Filani gathered that the love birds made an appearance at a show with media personality Toke Makinwa where they took selfies together.

55-year-old Paul Okoye is living happily with his son and daughter, It is not known whether he is married as he kept this private from the media.

It is however a known fact that he loves his children so much and he supports them and dots on them.

“Stop hating me for the one thing I did wrong” Yul Edochie tenders deep apology to wife, appeals for peaceful home