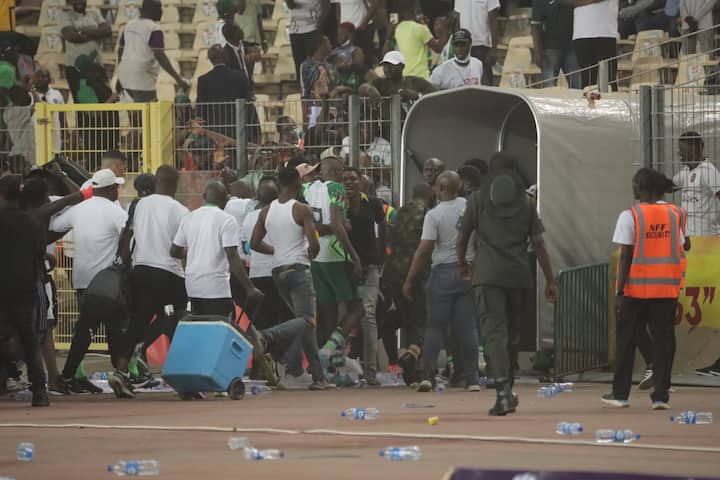 Kabungo, a Zambian medical practitioner, was said to have died as a result of the stampede that occurred at the Moshood Abiola National Stadium in Abuja before the commencement of the match.

However, another account blamed fans’ invasion of the pitch after the match for the doctor’s death.

Punch newspaper reports that neither officials of the Nigeria Football Federation nor CAF have confirmed the doctor’s death.

FIFA to act on crowd disturbances at Abuja stadium

The BBC reports that the Federation of International Football Associations will take a dim view of scenes at the Abuja stadium that requires considerable explaining from both Nigerian security and football officials.

Angry spectators pelted players with water bottles – forcing them to cower and cover their heads as they battled their way down the tunnel following a mass pitch invasion.

President Muhammadu Buhari was earlier billed to be part of the dignitaries who would be supporting the Super Eagles against Ghana’s Black Stars.

Nigeria’s minister of youth and sports development, Sunday Dare, hinted that the president might be at the stadium.

Punch newspaper reports that neither officials of the Nigeria Football Federation nor CAF have confirmed the doctor’s death.