Nigerian Man Converts His Toyota Venza to Luxury Rolls Royce Sweptail Himself, Photos of the Car Wow Many

Nigerian Man Converts His Toyota Venza to Luxury Rolls Royce Sweptail Himself, Photos of the Car Wow Many, The saying that when life gives lemons, one should turn it to lemonades has been demonstrated in the automobile creation of a Nigerian man. 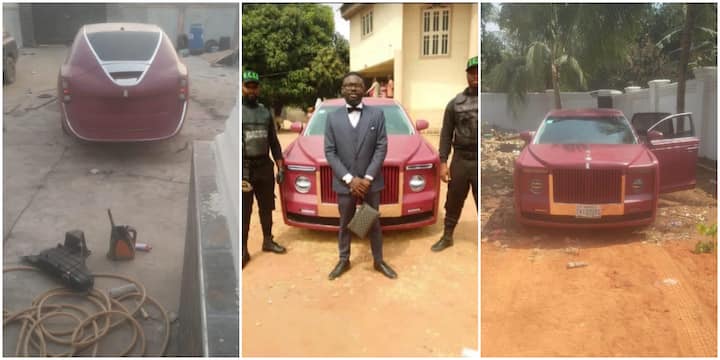 The Oraifite indigene in Anambra State identified as Nonso Offor transformed his Toyota Venza car to a Rolls Royce Sweptail.

The Rolls Royce Sweptail is reportedly the most expensive car ever

The Rolls Royce Sweptail is an expensive whip made in the United Kingdom by Rolls Royce Motor Cars and goes for $13 million (N5.3 billion).

Beautiful Life reports that the car is the most expensive ever.

While it is not clear what the intention of the man is in transforming the car, it has since become an internet sensation.

One stunned Facebook user, Darlington Chidera Ibekwe, shared photos of Nonso posing in front of the transformed whip and different views of the car.

“And while he was doing this or even disclose this to some of his friends. They might even call him f*ol.”

“Soon, a foreign country will pick him up and utilize his talent. I weep for this Nation that cannot harness and make use of her talented citizens. Is Nigeria CURSED???”

“The company of that Toyota venza and Royce may not find this funny, its better to get a raw material or different motor parts then create your own car than converting someone’s work to another person’s work also.”