Young Nigerian Man Dresses Like Spider-Man, Goes Around to Clean Streets, Many People Watch Him in Video, A young Nigerian man, Jonathan Olakunle, goes around Osogbo in a Spider-Man outfit as he cleans the streets. 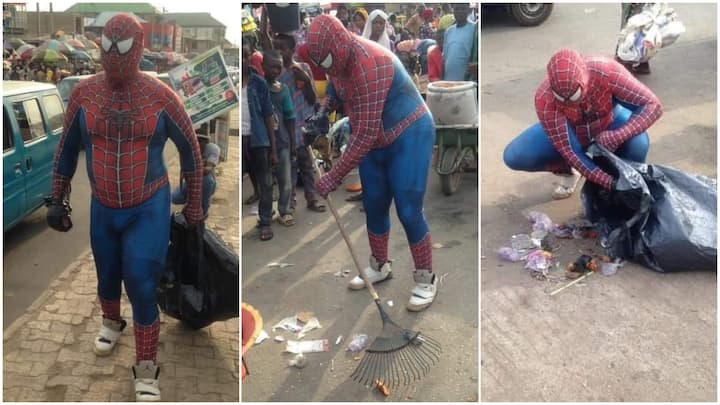 Olakunle revealed that every neighbourhood needs somebody like him. The young man said though he started environmental sanitation in 2004, he began going around sometime later.

The young man in a BBC Africa interview stated that he decided to work in a Spider-Man outfit because it draws people’s attention to what he is doing.

“I’m not happy with the way I see waste littering everywhere, it has become our normal way of life and which isn’t supposed to be our way of life.”

The Nigerian Spider-Man as he is popularly called added that he hates dirty environments so much. When he was cleaning in mufti, it was hard to convince people to join him in the exercise.

In a part of his video interview, the man carried a woman’s baby as he lectured people on the need to keep their environment clean.

“We need to stop the belief that we are dirty people. Ther’s so much litter in our society today because there’s no regulation.”

Watch his video below:

Below are some of the reactions to the post:

“Well done, raises awareness makes people look and think. No matter where we are litter is a problem Litter attracts Litter #litterattractslitter.”

“I am really encouraged by you. I bet you when I go out tomorrow I will buy rake to start with my little street/environment. This is raining season. The Street gutters needs to be cleared of plastic dirts before the actual full rain.”

“You are truly a hero. Our environment needs a hero.”

“Well done…topic of great importance..my biggest problem with our people.”