Nigerian Man Converts His Old Car into Expensive 2016 Mercedes Benz, Photos of the Fine Whip Go Viral, Instead of buying a new car, a Nigerian man turned an old car into his dream car by changing its body parts. 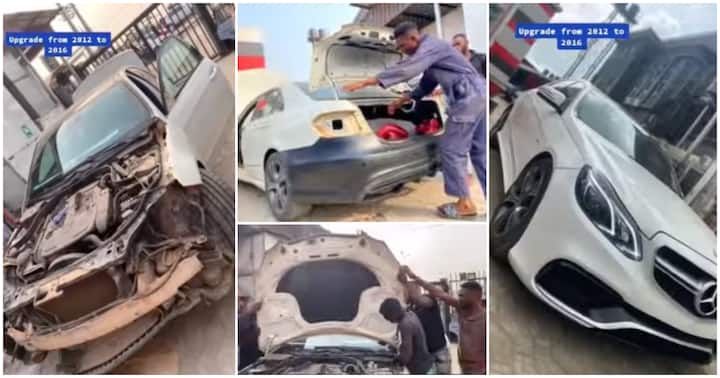 Photos of the new whip as shared by @gossipmilltv on Instagram showed that the unidentified man turned his car into a 2016 model of Mercedes Benz.

The car was also painted into white, giving it that brand new look like a recently bought whip.

Check out photos of the transformation process here.

“This is actually cool.. and people upgrade the looks of their cars everywhere.. what’s the big deal.”

“Like say them dy use #200 dy upgrade car carry your bicycle go upgrade make you head how much.”

“Forget ooo some cars wey you dey see for road no be tinted ooooo…Nor be brand new ooo….half and quater of them nah confirm upgrade ooo.”