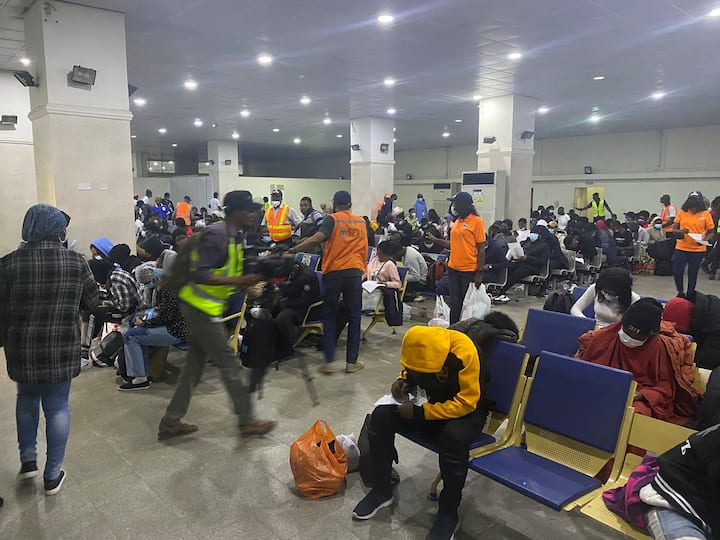 Samuel Otunla, a Veterinary Medicine master’s student at Sumy National Agrarian University, spoke with Premium Times, noting that it has been an uncomfortable experience. According to him, March 3 was one of the most terrifying days.

Narrating his experience, he stated:

“Once we got the safety warning and arrived in the basement, we heard one of the loudest explosions and in a few minutes, the electricity went off – not just in our area but all over the city. Water was also off. Though it was restored 17 hours later, it was an uncomfortable experience.”

In a separate report by The Cable, students stranded in Sumy State University (SumDU), Ukraine, are said to have appealed for an immediate evacuation.

Several students are reportedly still trapped in the school, as they have been unable to leave the city.

In a viral video posted online, the students were heard chanting “let us go home. We want to go home”.

African students in Sumy are protesting against the #Ukrainian Army to let them go.
Ukraine holding them hostage and using them as human shield against #Russia
The students were chanting, “Let us go home,” “we do not to be part of your war,” “I don’t want to be used as bait.” pic.twitter.com/nq7J9ZeIoV

Route out of Sumy blocked

It was learnt that the access route out of the city had been blocked, thereby preventing them from leaving.

One of the students alleged:

“For the past two weeks that this war has started, apparently, there has been a route to leave Sumy but the school has refused to provide us with buses, transportation to leave this place.”

Reacting to the plight of the students in Sumy, Geoffrey Onyeama, Nigeria’s minister of foreign affairs, said the country’s ambassador to Ukraine, Shina Alege, is following up with the Ukrainian authorities.

He said Dmytro Kuleba, minister of foreign affairs of Ukraine, has given the procedure to follow in respect of the evacuation of the Nigerian students.

1/2 Telephoned with the President of the Nigerian Students Union of Sumy State University, Fehintola Moses Damilola to brief him on the evacuation plan of the Ukrainian Government for the Students in Sumy and to reassure him and his compatriots that the