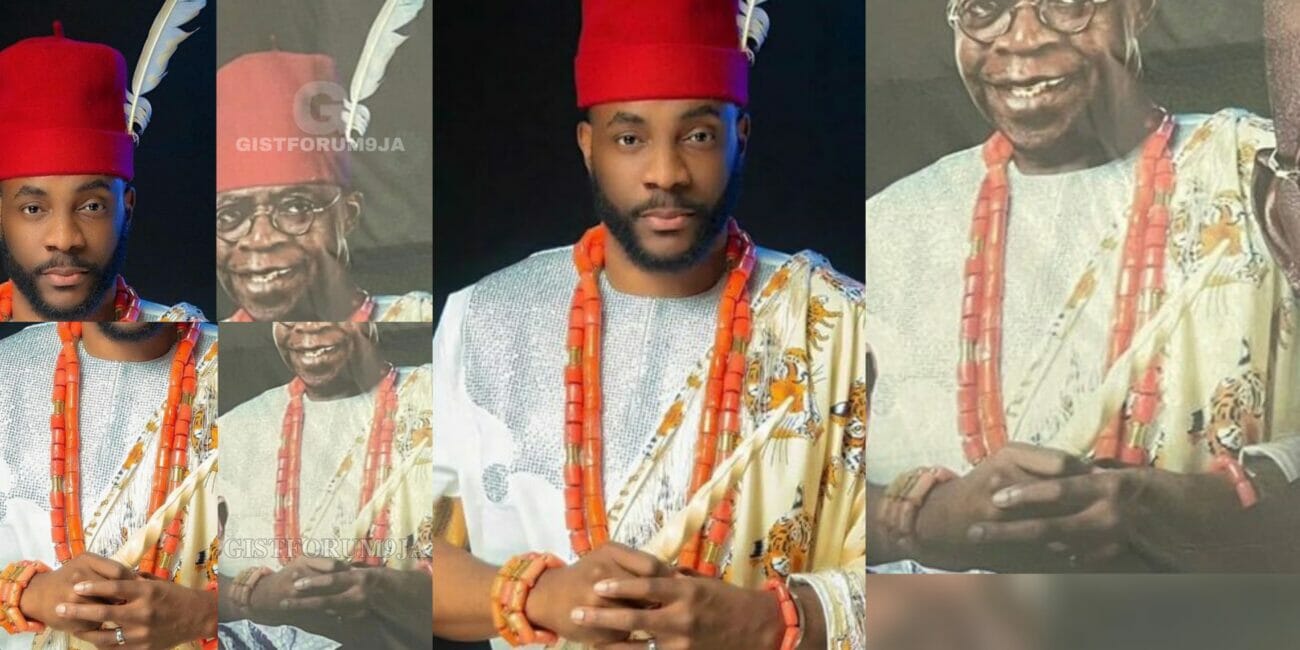 His political team did a campaign billboard for him in Lagos with a photoshopped photo of him in Ebuka’s body. Ebuka’s head was cropped out of the photo, and Tinubu’s head was added to Ebuka’s picture.

The editor, however, failed to crop out Ebuka’s wedding ring, cap, hands and more which made it easy for many to spot the photoshop. While some made fun of the cropped image, others expressed disappointment and disgust at Tinubu’s love for fakery.

This viral photo was shared by Dino Melaye, who stated that was nothing original about Tinubu.

“See how Tinubu dem photoshop Ebuka’s picture. Plus feather and ring placed in same position. Oga ooo. There is nothing original about this Emilokan man. SDM”.

One Bad gal kushi wrote, “This is not even funny. It’s very disturbing

One Omega dreams wrote, “Omo the red flags. Are very visible!!! Dear Nigerians, save your country!!! Go & collect your PVC!!

One Dejay tee wrote, “Can you imagine? Chai this man is definitely a criminal I swear… nothing is legit about this human… He’ll finish this country if una like make una still think 2023 elections is about tribal game. It’s about redemption and survival of this country and her people. Please vote PO

One Mezie official wrote, “I seriously don’t know what sign again we want. The gods are constantly dropping and showing us. Thick red flags but we just dey play. If una like no vote wisely na all of una go pay the price. Good or bad governance no dey target any particular person. E go touch all of una

One Richy Kuzee wrote, “Everything about this candidate is shrouded in controversy

Just days back, Bola Ahmed Tinubu had got Nigerians talking after he made another blunder at his political rally in Lagos State.

On Saturday, 26th November, APC held a rally for its presidential candidate, Tinubu and his vice, Senator Kashim Shettima at the Teslim Balogun Stadium Surulere in Lagos State. The rally was tagged the ‘Mother of all rallies’. some of the dignitaries present at the rally include Lagos Stae Governor, Babajide Sanwo-Olu, ex-Governor of Lagos, Babatunde Raji Fashola, Speaker of the House of Representatives, Femi Gbajabiamila among others.

During his speech, Tinubu urged the electorate to use their Permanent Voter Card, PVC; however, in the process of pronouncing PVC, the 70-year-old who has been committing blunders in previous rallies pronounced APV.

Nigerians had taken to social media to react to yet another blunder by Tinubu. While many joked and said he has been giving back-to-back content like skitmakers, others opined that he has dementia.

In another blunder, Netizens mocked Tinubu after he mistakenly prayed for his pposition party, the People’s Democratic Party (PDP) instead of his own party, APC during a presidential rally flag-off in Jos.

Hermes And Doyin React As BBN Star, Allysyn Shows Off Her Beauty In Crop Top Outfit

Mary Njoku, others celebrate Uche Ogbodo after tying the knot with her younger boo