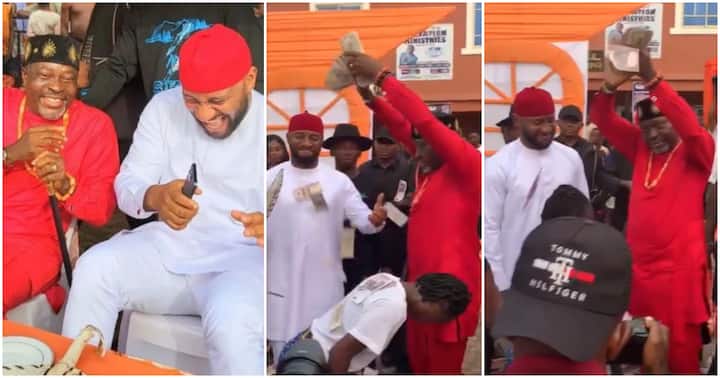 Apparently, the actor and presidential aspirant is working on a new movie with senior colleague, Kanayo O. Kanayo.

From indications, the movie is going to touch on the topic of money rituals and sacrifices.

Edochie got his fans excited with a video showing a party scene that is expected to feature in the upcoming movie production.

The video captured the moment some men joined Edochie on the dance floor and rained cash on him as he showed off his moves.

Another portion of the video captured the moment Kanayo who was dressed in a red outfit made an appearance on the dance floor and heavily rained N1000 notes on Edochie.

“Not a man of love doings.”

“And you nd Nnayi Sacrifice ended up sacrificing someone.after you promised you won’t I can’t wait to see this banger.”

“you too much❤️❤️my best Igbo actor a son of the soil just like his father much respect Sir.”

Nigerian lady visits husband at site, gives him snacks & drink to encourage him

My oga no dey wear fake: Isreal brags as he flaunts Davido’s jewellery in video