34 Minutes of Madness: ‘Big Woman’ Stops Bankers from Doing Anything, Demands Refund of her N100k in Video, There was drama at a banking hall as a ‘big woman’ went berserk in her quest to get an issue resolved. 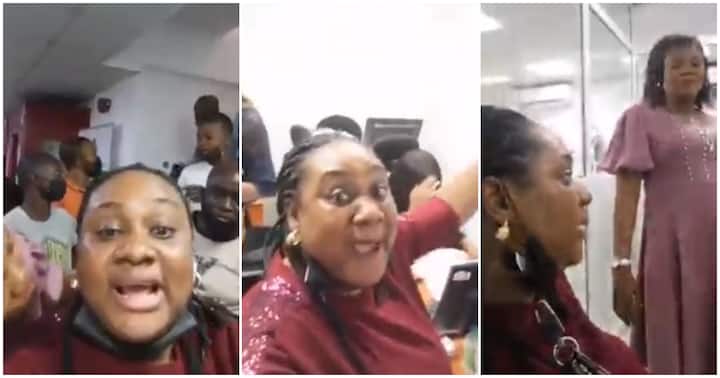 The woman took matters into her own hands by physically stopping bankers from attending to other customers.

In a live video recording the whole incident she made, as reshared by Facebook user Hammid Bakare, the woman lamented that N100k was deducted from her account and that she had been visiting the bank for the past one month to get it rectified to no avail.

The visibly displeased woman stated that instead, bankers kept making her return to the bank and go through procedures that usually do not yield the needed result.

She threatened to go naked

Her loud outburst caught the attention of everyone in the banking hall.

Poised to follow through with the threat to halt banking activities that day, the woman wore her car key around her neck and would stop any banker she saw attending to a customer.

In the footage that lasted over 34 minutes, pressure from bankers, security personnel and some concerned customers to arrest the situation only infuriated the woman more.

At a point, she threatened to go naked and vowed to make the bank her abode that night.

“I used an ATM machine in Zenith Bank Kano Road Sokoto in 2012. The machine counted the money (N20,000) and didn’t dispense. I heard when the money dropped inside the machine. I was debited.

“That’s it, till date. I never got my money back. Zenith.”

“This is a ‘python dance’ approach lol… sometimes, this is the language people understand faster. Keep up the good work madam.”

“Nigerian banks you have to be begging them as if they are doing you a favour.

“Zenith Bank Plc should take note of how people are badly treated in their branches.

“Some of the staff are cooperating with criminals to steal from poor Nigerians.”

“Organized kriminalz in suits…na most of them dey work with outside TIVZ to wreck people, how person wey open account under 24 hours done dey revieve calls from fraudulent peepz.”