Talented Nollywood actress, Shaffy Bello, clocks a year older on Friday, October 8, 2021, and she has taken to her Instagram page to mark the day in style. 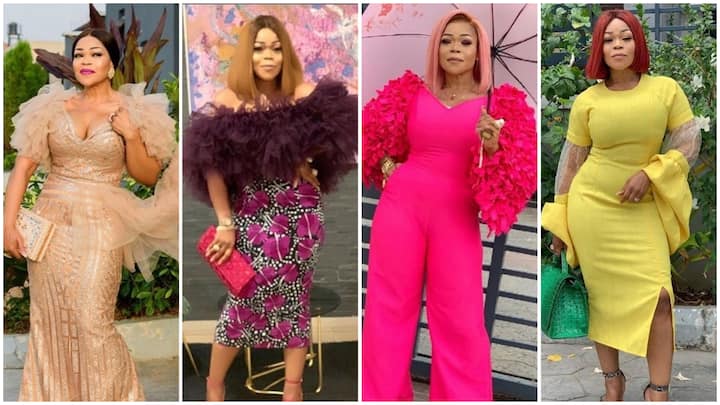 The screen diva whose sense of style has earned her a place on the Nigerian fashion scene did not disappoint her fans and followers as she first released a photo of herself in a now-popular design by Xtrabrides Lagos.

Well, Bello decided to get a piece of that pie as well only she got hers in form of what appears to be a jumpsuit.

While the upper part of the outfit is similar to that of Ini Edo and Tacha’s, the lower part appears to be a jumpsuit and not a mini dress like theirs.

In the second photo shared, Bello dons a gold lace/feather dress with a partly sheer bodice bedazzled around the cups.

Shaffy Bello was one of the stars to grace the high-profile wedding of Adebola Williams.

The movie star who was a part of the asoebi ladies donned a dress designed by Xtrabride Lagos and it goes without saying that she made a gorgeous wedding guest.

As is the case with many celebrity fashionistas, it didn’t take long before a fan replicated Bello’s look.

Rather than the oxblood and white combo as seen on the actress, this beautiful lady opted for a blue lace which she combined with sheer fabric for the top part of her dress.

The Nollywood industry over the past years has witnessed the rise of numerous fashion icons on the entertainment scene, and Rita Dominic is unarguably one of them.

The talented film star may have won over hearts with her stellar acting skills but it goes without saying that her sense of style has also contributed greatly to the love and respect bestowed on her.

Known for her effortlessly chic fashion sense, Rita has proven over the years that when it comes to looking classy and elegant, she’s got everything on lockdown.

She Has Cried Well: Reactions as Tega Makes First Appearance After Deleting Instagram…