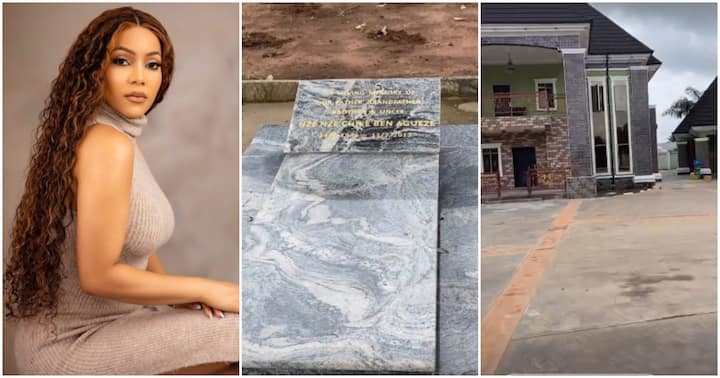 The reality star was among those who showed support to colleague, Mercy Eke, by taking a trip down to Owerri for her late father’s burial ceremony.

However, after the ceremony, Maria also used the opportunity to pay a visit to her late father’s house in the village.

A video spotted online captured the reality star filming her environs as they tried to locate the house.

Upon arrival, Maria showed fans her late father and grandmother’s grave which were just beside each other.

The reality star got slightly emotional as she mentioned how much she misses her late dad.

A different portion of Maria’s video also showed fans her father’s mansion and his expansive compound.

“I felt the pain in her voice ..sorry baby,I am sure he’s proud of you.”

“Awww… May his soul continue to rest in peace Amen .”

“Stay strong my love. Your dad’s compound is huge and beautiful.”

She Sneaked Out of the House: Tchidi Chikere Shares Details on How Marriage With Nuella Njubigbo Ended