“Baba Smile Na”: Heart-Melting Videos of Obasanjo Dancing With Daughter at Her Wedding Sparks Reactions, Former President Olusegun Obasanjo is indeed a blessed man as he recently got to witness yet another wedding ceremony of one of his children. 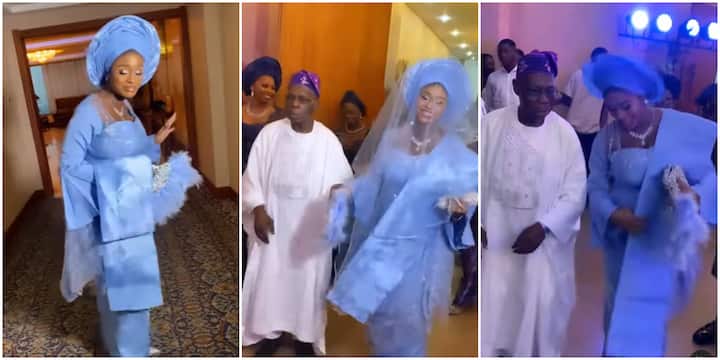 The elder statesman’s daughter, Feyintola’ tied the knot over the weekend and he was well on ground to show support for her.

A series of videos making the rounds on social media captured the moment Obasanjo led his beautiful daughter into the venue of the ceremony.

The two were allowed their moment and Obasanjo was quick to send off an intruder who tried to steal the shine from them.

Another clip equally captured the moment Obasanjoy joined his daughter on the dance floor inside the venue of the wedding ceremony.

Check out the clip below:

The video stirred hilarious reactions from members of the online community with some making comments about Obasanjoy’s dance steps.

“Which kind dance be this baba OBJ?.”

“Person get mind marry obasanjo pikin…if he do anyhow any day obasanjo go treat him fck up.”

“Obasanjo with his beautiful daughter.”

Nigerian lady meets Burna Boy for 1st time in video, hugs him & asks for his signature