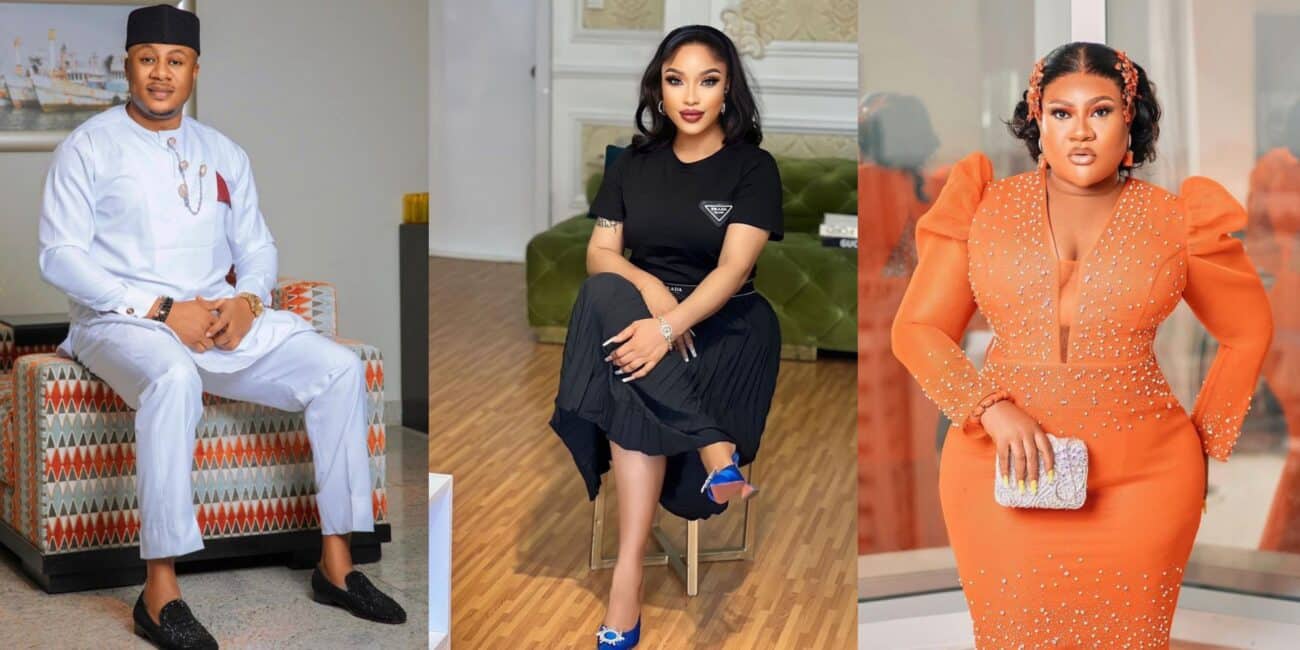 The politician and philanthropist noted how they are fond of defaming their exes, claiming they fed them, when the relationship turns sour.

He stated that many of them lie to gain recognition or respect.

“Naija yeyebrities once you dump them, their next confession is “I fed him. They would lie to gain recognition or respect.
Kilode”

Questioning them, he wrote, “But why all the lies? Kilode? This must stop”.

This is coming hours after Tonto Dikeh reignited her beef with her ex-husband, Olakunle Churchill by belittling him.

Tonto Dikeh had thrown a shade at him, referring to him as a mini man.

The mother of one reignited her beef with her ex, while trying to pass a message to the public.

Tonto noted how many who mocked her when she confessed to feeding her husband and his mother, are now in similar situation.

Noting how life is fickle, she told the public to learn how to be delicate. In all, her point is to never laugh at a disappointment/fuckup because it isn’t theirs.

“Almost all the ones Toms and Jerry’s who laughed when I confessed I married and fed a mini man and his mother with my hard earn money (playing sonita and destinabari) are the ones fighting the same reason….

Learn to be delicate…
My point is never laugh at a disappointment/fuckup because it’s not yours!!!!”.

Recall that Opeyemi Falegan’s ex-girlfriend, Nkechi Blessing had also claimed to have fed him.

During their messy fight, she pointed out how despite his level of degree, he is still unable to feed himself.

Nkechi claimed that an undergraduate like her was able to feed a degree holder for a year.

She questioned why his ex wife’s broke up with him despite having degrees.

The actress also claimed that Opeyemi had vowed never to be like Tonto Dikeh’s ex boyfriend, Prince Kpokpogri but now he is doing worse than him.

She wrote, “Even with all your degree you are still BROKE I go employee and pay you salary for 10 years Non Stop BRO!! Bunmi wey get all the degree wey you marry wetin happen?

You need to come learn how to throw shade from me Opeyemi you have absolutely nothing on me. Church Rat!.

“Your ex wife had all the degree oo but she still didn’t stay 3 women don leave you Sir, you kept begging me not go ever leave cus of what people will say..

You dey whyne me? Na jeje I kuku sit down you come for me again this time I go finish you!!

Phd holder wey illiterate like me they help type caption Ko ni da fun degree!!! Are you mad or something? Your first interview with Orisun you know how many hours I take couch you? This one Dey whyne me ni?”.

She added, “I remember you saying you can never be like kpo kpo garri, you come even worse I will go that route with you sir!

It should be in Hostory that I NBS an ordinary garage illiterate fed a whole PHD holder for one whole year…see Nkechi was kere ni koi ni da fun doctorate degree isonu! If you vex me too much i go enter flight come that UK make you and RAF face una sef…leave me alone Opeyemi!!”.

“I had strongly decided that I wasn’t going to marry an actress” Lateef Adedimeji opens up on how he met his wife, Mo Bimpe (Video)