“Some Are Over 7 Ft Tall”: Stunned Oyinbo Man Shares Video of People in South Sudan, A white man has shared a video of some very tall people he met during his trip to South Sudan. 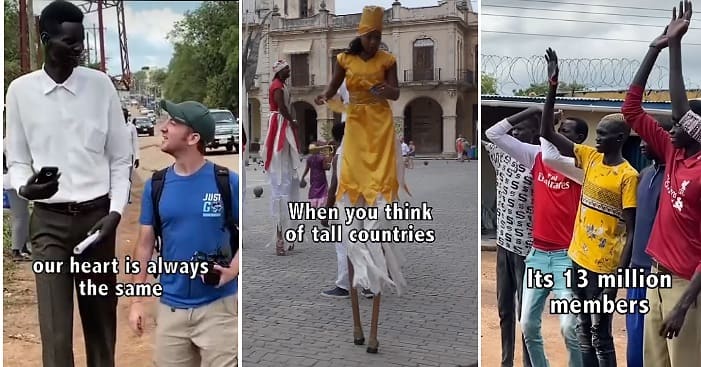 The oyinbo man made a documentary of citizens of South Sudan, and described them as very tall people with stunning physical features.

In a video, he revealed that he met people who are over 6 feet tall with some measuring up to 7 feet.

“I went to South Sudan and I met the world’s tallest humans. When you think of tall countries places like Holland probably come to mind. But believe it or not the Dinka tribe of South Sudan towers over them all. It’s 13 million members have stunning physical features that you won’t find anywhere else. They are slim and tall measuring well over 6 feet. Some into the 7s. The tallest NBA player in history is from South Sudan. He is a whopping 7 feet 8 inches tall.

So why are the people of South Sudan tall? One theory is that animals and creatures in hot climate have longer limbs to keep their bodies cool. For example look at the Cheetah. This may explain why the Dinkas have become the tallest people.”

“Our diversity is our strength, something to admire for., ❤️ Alas Politics throughout the Globe has generally kept people in divide. .”

“Hello, I am from Iran. I wonder why you didnt visit Isfahan while you were in Iran. Isfahan is outstanding and full of attractions.”

“Dutch people are the tallest. Croats, Serbs, Bosnians, and Montenegrins are up there as well.”

“But then how do you explain how short the people are in Honduras, El Salvador, Oaxaca etc those are really hot places closer to the equator also?.”

Chacha Eke is a ‘fierce queen’ as she celebrates 35th birthday with a new beginning, days after calling for help (Photos)