People Thought I Was Mad: Young Nigerian Man Who Built Sports Car Prototype in Enugu Speaks in Video, A young man who became popular online after building a sports car prototype has said that many people thought he was mad. 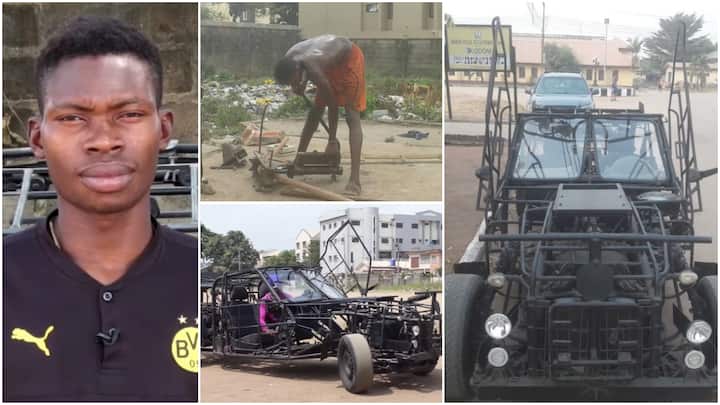 In an interview with BBC Pidgin, Amalu Chikamso said when he was building his first prototype, he was always going from one dump to another searching for materials. That made people question his sanity.

I was searching dustbins

The man said he knows almost all the dustbins in Enugu state as he scoured them for scraps from morning till evening.

The 21-year-old stated that he has been dreaming of building his first car since he was a child playing with plastics to make toy cars.

Chikamso added that whenever he was going to school, he would branch at a dumpsite to pick materials for his creation, adding that he never got any support.

As he grew older, he began dreaming of building something real. In 2013, he built a helicopter prototype.

When he first built his car, he placed a manual Gulf vehicle engine in it which later knocked. He could not replace it because there was no money.

Now running on an automatic engine, the man said he named it Gravity X as he made it in such a way that even in an accident, the car cannot summersault.

I still want to go to school

Using 10 months to build the car, the young man stated that he was almost frustrated and wanted to discontinue the whole process.

He said he is still interested in going to school not to get a certificate but get more knowledge in mechanical engineering.

Watch his interview below:

Below are some of the reactions to Chikamso’s interview:

“Nigeria too get many talents but no sponsor.”

“He’s so smart. He needs to enroll in an Engineering Institute.

“Saw him last year December at Yaba never had time to post his video.”

“Ooohhhh Africa.this guy is whole investment package but he can be a liability due to unsupported system for the visionaries.”

You Won’t Have to Miss Your Phone: Wedding Dress with Pockets Wows Fashion Lovers