Twitter – Peter Obi’s supporters say they will vote for Eloka Paul Nwamu, famous as Eloswag, is a Nigerian digital marketer, artist, and online content creator, who is currently one of the 24 housemates currently participating in the 2022 reality TV show. 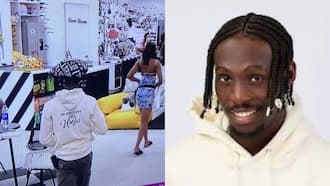 The words are regularly used by Labour Party (LP) supporters as a way to campaign for Obi and his running mate, Yusuf Datti Baba-Ahmed.

After the photo of the reality star wearing the customised sweater hit the internet, supporters of LP have started mobilising support for him.

My People, Eloswag @Eloswager is one of us. He is OBIdient & YUSful. VOTE & FOLLOW him massively. #BBNaija 🔥✊ pic.twitter.com/nw79YwErWQ

One of such supporters, Nabir Abdulsamad wrote on Twitter:

“How is this write up on Eloswag merch not trending, especially for you all that has constantly said big brother is a distraction. #BBNajia I love how he’s working smart and not hard. This is beautiful.”

“Ok this is it. I am not a fan of BBNaija and has never liked that show. But because of Eloswag being openly OBIdient, I am now a fan henceforth. Na house mate where dey OBIdient we dey vote for.”

This is the man for my vote in this #BBNajia season. Eloswag understood the assignment, he knew the right loophole to tweak & now he's spreading the word OBIDIENT & USEFULNESS. OBIdients do you understand the assignment??? pic.twitter.com/ErNBUQ78kS

We’re Not Like You Who Couldn’t Zip Up: Georgina Onuoha Replies Yul Edochi, Heavily Slams Actor and Gistlover