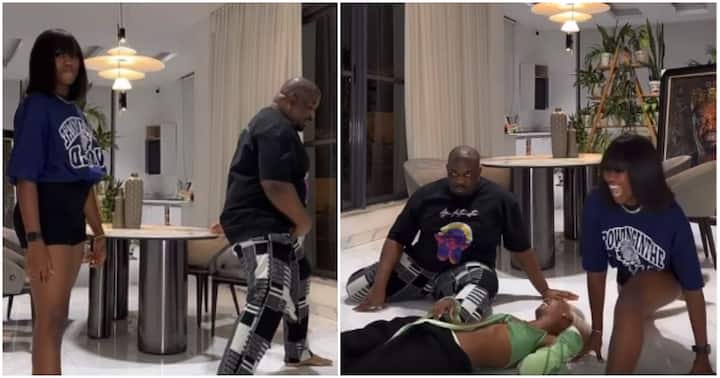 Social media has a way of making people do things they might not have considered before, especially after it has gone viral.

Don Jazzy is however known for entertaining his fans with his hilarious videos despite being a top music producer.

For the Drop It challenge, the music mogul teamed up with two young models, Jessica Okoli and Vivian Gold Kaitetsi.

The trend involves one or a group of people squatting slowly to a song, “Yoncé” by Beyoncé, in different strange places.

However, over time, people have edited the challenge to how it suits them. Don Jazzy and his team decided to split instead of squatting.

The music producer looked so serious as he struggled to split while his two teammates did it with ease.

Don Jazzy also blamed the ladies for not getting it right. He wrote:

“Oya @mufasatundeednut I did it o. But these girls are spoiling my moves jor.”

A post shared by ITS DON JAZZY AGAIN (@donjazzy)

“You no Dey disappoint .”