Portable nabs guy impersonating him, makes him change hair from gold to black

I’ll Wound Myself Before I Deal With You, Portable Nabs Guy Impersonating Him, Makes Him Change Hair to Black, Controversial rising star, Portable, recently nabbed an individual who has been impersonating him on social media and fooling unsuspecting victims. 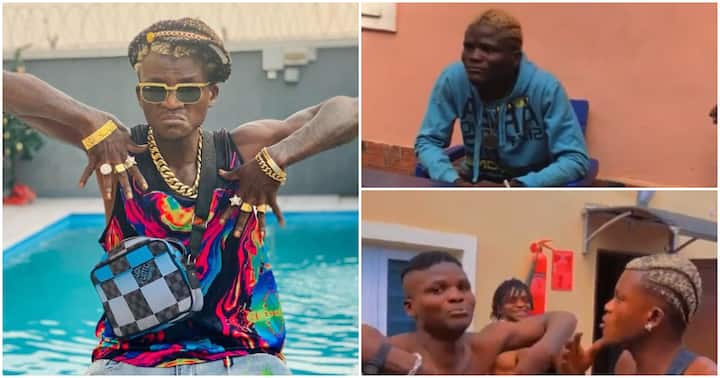 Portable asked why the guy has been going around impersonating him and even going the extra mile of rocking his signature hairstyle.

The Zazu crooner went on to threaten the individual as he mentioned that he would inflict injury on himself first before dealing with him properly.

He equally ordered the impersonator to provide the video he has been using to fool people. Watch the clip below:

Portable resolves issues with his impersonator

Ednut returned with another video showing the moment the Zazu crooner made peace with his impersonator. The young man was seen rocking a different hairstyle and he also changed the colour of his hair to black.

Portable encouraged the individual to promote his hustle as he prayed for him to also find fame in due time.

“Even shaggy had many impersonators, he used them to make money.”

“He does the right thing in a funny way . He is indirectly telling this guy to be himself . “Get a name for yourself”

“Wait but they look so much alike see wahala o . They haffff clone our portable o . We nor go gree.”