Portable Cries Like a Baby As Girlfriend Surprises Him With ‘Pan Ran Ran’ on Valentine’s Day, Video Goes Viral, Budding Nigerian singer, Portable, was moved to tears on Valentine’s Day after his girlfriend’s grand romantic gesture to him. 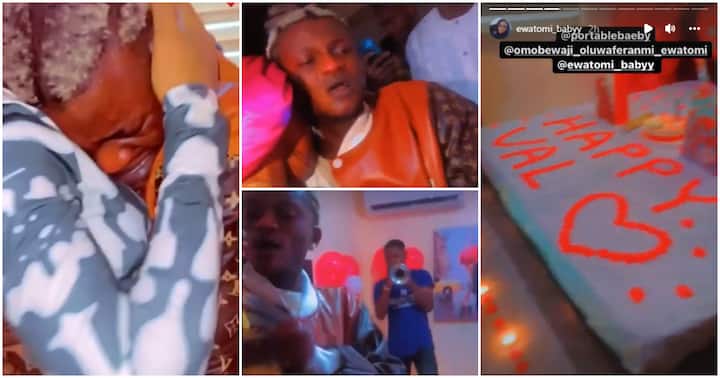 February 14 is known to be a very big deal to a lot of Nigerians especially those who have lovers and are hoping they go all out for them.

Well, Portable was not left out on the big day seeing as his girlfriend, Feyishara, went all out to make it a very special one for him.

Portable’s Valentine’s Day surprise was captured in a series of videos making the rounds on social media.

It all started when the singer was led to a room and upon his entrance, a group of friends excitedly screamed the word ‘surprise’.

As soon as he stepped in, a trumpeter aka ‘pan ran ran’ started to play Timi Dakolo’s popular tune, Iyawo mi’.

A look around the room also showed that it was decorated with rose petals used to make heart shapes on the floor as well as spell out the words ‘Happy Val’ on the bed. The room also had numerous balloons and ribbons tied around.

Portable was no doubt very impressed and he uttered the words ‘mo fo o’ meaning he is moved.

Just as the singer thought that was over, another praise singer was called into the room and he sang praises with Portable’s name, Omoolalomi. The Zazu crooner was so moved that he brought out money from his purse to spray the singer.

Portable then stretched his hands out to his girlfriend and gave her a very tight and emotional hug before he burst into tears.

The Zazu singer did not mind that his ‘hard guy’ status might have been compromised as he continued to cry openly. His girlfriend also tried her best to wipe his tears and console him.

Taking to his Instagram page, Portable shared the videos and showed great appreciation to his bae, Feyishara.

“Valentine Zeh for here oooo. Thanks my love @omobewaji_oluwaferanmi_ewatomi For the surprise i really appreciate this. Forever is the deal ZAzuu Mama Zeh Bizza Bizza.”

Many Nigerians had a lot to say about Portable’s Valentine’s Day surprise and seeing him break down in tears. Read some of their comments below:

“U self Dey romantic oooo. opor.”

“Who’s this Were Paranran now !”

“Every man has that woman that can bring tear to their eyes …no matter how strong hearted a man is there’s always a soft side and emotional part of him.”

“Even portable sev got surprise who am I nawa… year tun ti bo.”

My vision is clear: Kanye West sends pickup full of roses to Kim for Val’s Day