Pretty Mike: 5 Times Nigerian Socialite Got People Talking With His Grand Entrances at Top Events, Popular Nigerian socialite, Pretty Mike, is one star who adds his own dimension to society events. 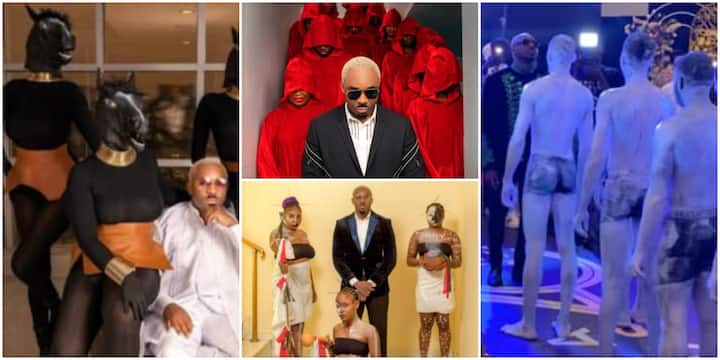 He no doubt enjoys being the center of attention, especially at parties, and he gives people things to talk about.

It has become Pretty Mike’s signature to storm parties with his unique entourages that ranges from pregnant women, women on leashes, men in underwear, native doctor looking men, and more.

This socialite might have earned criticism from people for his over the top entrance at parties but that has kind of contributed to keeping him relevant in celebrity circles.

Today,we will take a look at some of the times Pretty Mike had internet users looking on in awe over his elaborate and grand entrances at parties.

The Nigerian big boy was one of the guests who attended a socialite’s birthday party and he no doubt divided the attention to the guests when he stormed the occasion with several men in red robes. According to Mike, he went bearing gifts.

2. Pretty Mike and his crew at Eniola Badmus’ party:

Top actress, Eniola Badmus, recently had an event and Pretty Mike made sure to attend with a group of men and women who were painted in white from head to toe and wore black underwear. Internet users blamed his action on the prevalent hunger in the country.

3. Pretty Mike and the 3 horsewomen:

The socialite was invited to the 60th birthday party of a friend’s mother and as expected, he decided to divert the attention to himself. Pretty Mike stormed the party with three ladies who rocked horse heads and wore saddle-like waist belts.

4.With ladies from the ‘occult world’:

Sometime in October 2021, Pretty Mike attended an event in Port Harcourt and he entered the venue with three ladies who dressed up like Nollywood’s portrayal of the occult world. Internet users had a lot to say about them.

In August 2021, Pretty Mike attended a wedding party with a man who appeared to be a herbalist. The plus-size herbalist had no shirt on and was also spotted in a red outfit that made him appear scary. He no doubt stole the shine from the newly wedded couple.

While these are just a few of Pretty Mike’s array of interesting entourages at parties, the socialite has carved a niche for himself and effortlessly diverts attention away from his hosts at events. Even though this used to earn him a lot of backlash in the past, people seem to have gotten used to it.