Priscy at 21: Fans slam celebrant’s friend, accuse her of overdressing

You Wan Dress Pass Celebrant? Priscilla Ojo’s Friend Shows Up to Her 21st Birthday Party in ‘Cinderella’ Gown, Popular Nigerian actress, Iyabo Ojo, went all out to throw a big birthday party for her daughter, Priscilla, as she clocked 21. 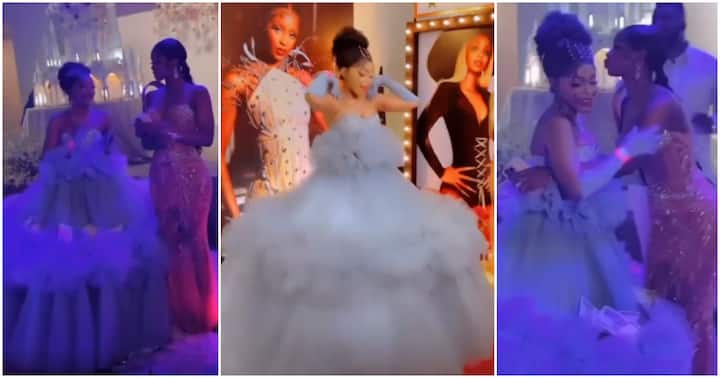 The big event held on March 13, and it had a Hollywood theme for guests to dress accordingly.

Numerous stars turned up at the event in lovely outfits but one of Priscilla’s friend’s outfit made headlines for an interesting reason.

Videos made the rounds on social media showing one of the celebrant’s friends, @thacutegeminme, who wore a big ball gown aka ‘Cinderella dress’ for the party.

The guest’s powdery blue dress swept the floor and even had to be carried at some point for easy movement.

Thacutegeminme later went on stage to spray crisp new notes on the birthday girl and her dress swept away some of the money and it had to be dusted off.

See the viral video below:

It wasn’t long before Priscy and Thacutegeminme went viral on social media with online users focusing mainly on her dress.

Many people accused her of overdressing more than the celebrant. Read some interesting comments below:

“Which kin yeye guest be this one .”