Reekado Banks Prostrates, Toyin Abraham, Lateef Adedimeji Kneel As They Pay Respect to Ooni of Ife at Event, In his regular fashion of showing support to youths in the country, Ooni of Ife, Oba Adeyeye Enitan Ogunwusi, graced the just-concluded Future Awards ceremony with his presence. 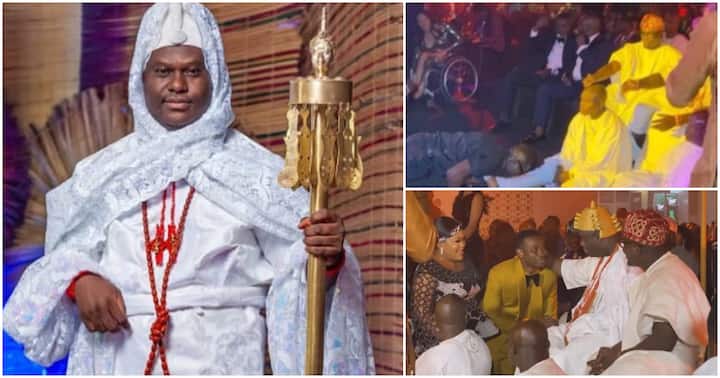 The highly-revered monarch who was also among the nominees for the night stormed the event with his royal entourage and some superstars made sure to pay their respects to him.

Ozumba Mbadiwe crooner, Reekado Banks, prostrated completely for the monarch as he paid respects to him.

The king beckoned on Reekado to come forward as he laid hands on him and showered blessings on the music star.

The Ooni’s royal guards were also quick to caution the singer from reaching for a handshake with the king or touching him.

Watch the video as sighted online below:

Nollywood superstars Toyin Abraham and her colleague, Lateef Adedimeji, also made sure to pay their respects to the monarch upon arrival at the event.

The two who were also joined by Lateef’s wife, Mo Bimpe, went on their knees as they took turns to receive royal blessings from the Ooni.

Check out the video below:

“It’s their kneeling on the ground for me .”

“My pple worldbest smile for me❤️.”