Rick Ross in Lagos: Cubana Chiefpriest Makes It Rain Cash on American Rapper, Nigerians Rush to Pick Money, Popular American rapper, Rick Ross, no doubt had an unforgettable time in Lagos as he partied with Nigerians for Easter. 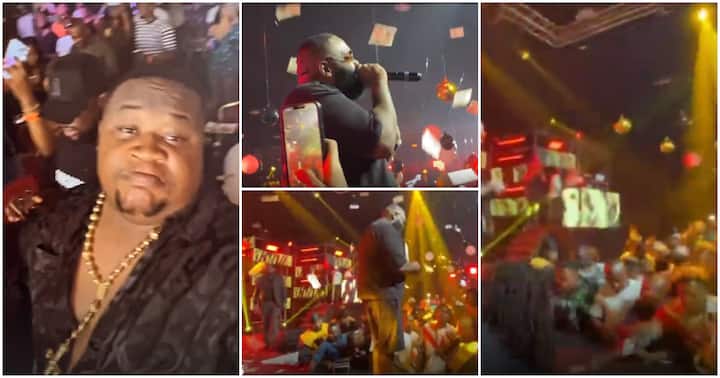 On the night of April 14, 2022, the music star took to the stage at a show which took place in Eko Hotel for the Easter celebrations.

Rick Ross took to the stage at the event and while he performed one of his popular tracks, Blowing Money Fast, Nigerian socialite, Cubana Chiefpriest, made it rain bundles of cash on the American rapper.

Several crisp naira bills started to fly in the air as Chiefpriest kept them coming while Rozay performed.

After a while, Rick Ross also reacted to the gesture by also bringing out bundles of cash from his pockets and throwing it into every direction of the standing crowd.

Excitement ensued after Chiefpriest and Rick Ross’ show of wealth at the event and many guests at the show were seen scrambling to pick as many cash notes as possible.

This caused a mild distraction on the crowd especially after it seemed like a small fight broke out because of the money.

Videos soon made the rounds online of the money spraying and picking at the Rick Ross show and Nigerians on social media reacted to it.

“I bet that dollars he sprayed are 100 dollar bills.”

“He just dey sing jeje he no even stress himself.”

“Respect to Rick Rose. He deliberately sprayed the money. If you know you know. That’s a boss move.”

“I wish I was there to pack money.”