“My Poor Baby Can’t See”: Runtown’s Baby Mama Cries Out As Singer’s Son Injures His Eye While Playing, Runtown’s son, Zamar, is in pain, and his mother, Selena Leath, is updating her followers about the incident. 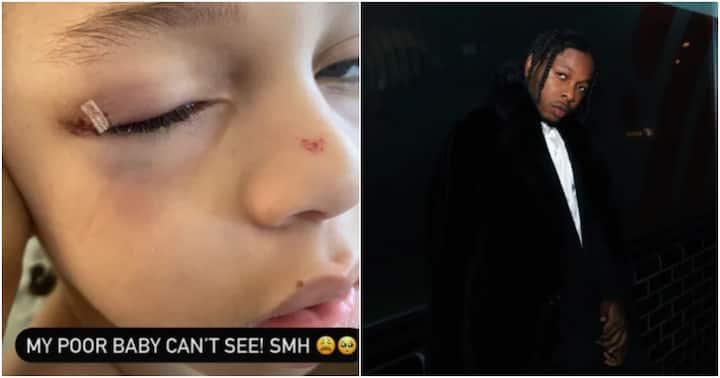 Selena took to her Instagram story channel to share images and narrated how the little man injured himself while playing around.

The mother noted that her son can’t see properly after the incident as she stressed how difficult it is to raise a boy child.

“Have a boy they said, they are much easier to raise than girls they said now we are off to the hospital to get stitches.”

Check out some of her posts below:

Social media users across the country have reacted differently to Runtown’s son injuring his eye, as shared by his mother, Selena.

some of the comments:

“He will be well by his grace.”

“Kids are like plantain, take your eyes away for a minute and they burn. Happy he is ok.”

“What is partially blind here? once the injury is healed he would be fine, kids can give one a heart attack.”

“These kids sometimes don’t know what rough play can cause them. He would be fine sha, no fear.”

“So sorry he will be fine.. but I don’t get the part of have a boy dey said and dey are more easier to raise than girls? Hmmmm is injury gender base? Girls can get hurt too.”