Sammie Okposo’s wife, Ozioma breaks down in tears at his Night of Tribute (Video) 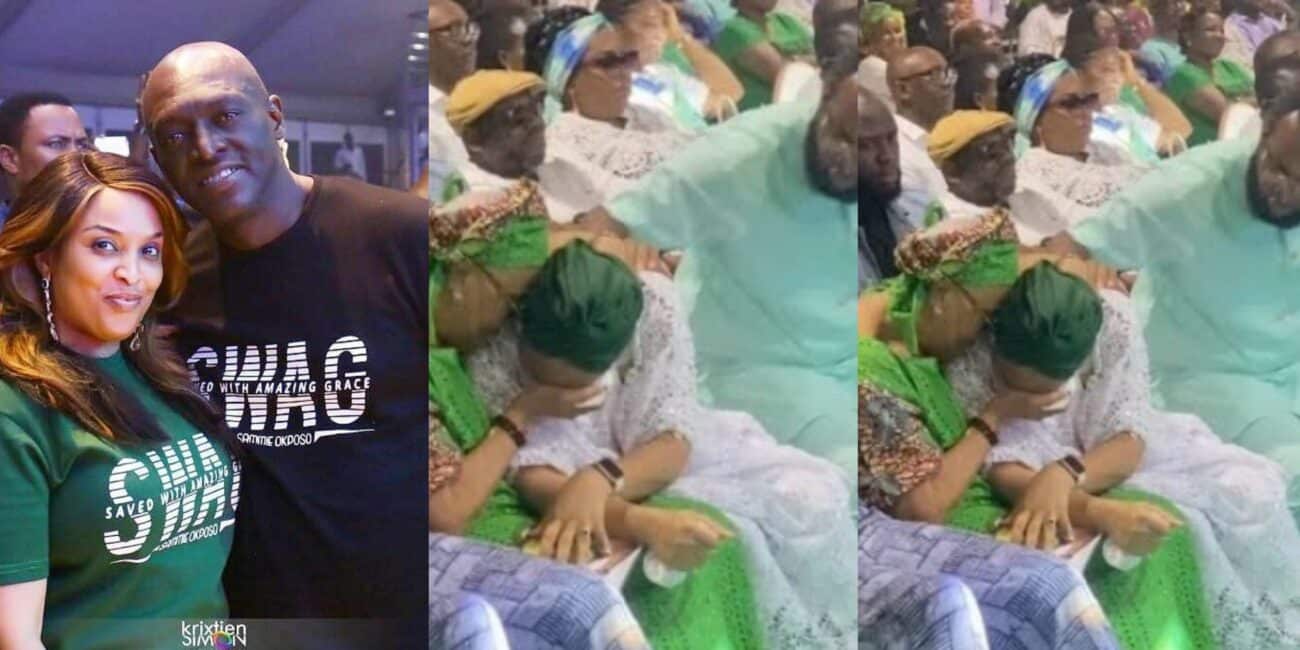 It was a sad night at the Night of Tribute of late gospel singer, Sammie Okposo.

Kemi Filani news reported that the singer died in his sleep on Friday, November 25th, at the age of 51.

His family had released his funeral arrangements. According to the obituary, a tribute night would be held for him on Tuesday, December 13th, followed by a service of songs on Wednesday, December 14th.

The singer would be laid to rest at a private interment on Thursday, December 15th, which would he strictly by invitation.

Ozioma breaks down in tears

In a new update, the Night of Tribute was held on Tuesday night, December 13th with celebrities in attendance.

A video making rounds on the internet showed the touching moment his wife, Ozioma broke down in tears as she heard and saw her husband on screen.

Kemi Filani news reported that days after taking a break from social media to mourn her husband, made her first official statement.

Ozioma who had been silent on social media since the tragic death of her husband shared a photo of the singer worshipping at a church on her Instagram story on Friday, December 2. She also replaced her Instagram display picture with the same photo.

However, Ozy as she is fondly called did not attach a caption to the photo.

How Sammie Okposo’s wife found him asleep on a chair

According to Pastor Flourish Peters, Sammie Okposo’s wife found him asleep on a chair, apparently, he slept into glory.

“On Friday, I received a troubling call around 4.45 am – a call I wish I never received. But it is what it is. It was Ozy Okposo (Sammie Okposo’s wife’s name) on the other side of the phone saying ‘Sammie, wake up in Jesus’ name’.

“So, contrary to what blogs reported, he did not slump and die. He sat on the chair watching TV, before sleeping. But never went back upstairs to sleep. From his sleep, he slept into glory.

“I went there and saw the body. I conducted CPR and hit him hard. But nobody sees Jesus and looks away. It becomes challenging when a believer crosses over to the other side.

It is deeply painful for me. I feel hurt,” Peters said shortly before his sermon on Sunday.

“I had strongly decided that I wasn’t going to marry an actress” Lateef Adedimeji opens up on how he met his wife, Mo Bimpe (Video)