The vendor of One Styk Fries, Dominic Oduro, has been selling fried yam for the past six years after he took over the food brand from his mother after senior high school. 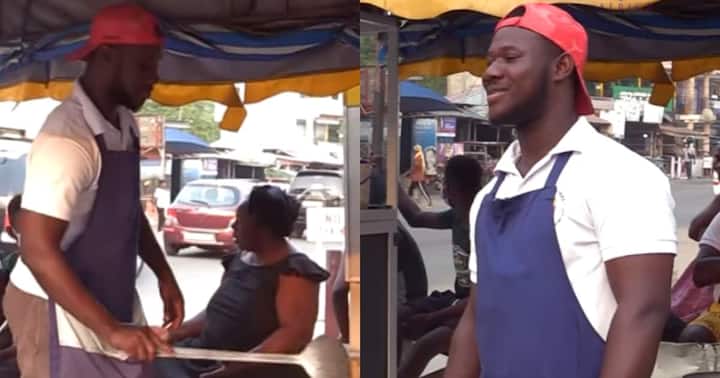 He worked as a swimming coach and French teacher before taking over the business at Bawaleshie, East Legon, Accra.

The alumnus of Labone Senior High School told SVTV Africa’s DJ Nyaami in an interview that the initial stage was not easy. He recounted that he was called names because of his gender.

Oduro, however, overlooked the challenges, focusing on growing and rebranding the small business. He mentioned that, when he took over, they were selling without a portable shelter.

His mother, Madam Akua Asare, told SVTV Africa that before Oduro took over the trade, the family planned for their son to further his education, but he turned down the opportunity, saying he wanted to take over his mum’s business and make it better.

”He told us that there are many graduates without jobs, so he does not want to be like them.”

Oduro’s bold decision paid off. ”Some of his graduate friends come here to borrow money from him. Gradually, he’s been able to get his first car from this,” Madam Akua said.

Oduro, in his 20s, hopes to open another branch of One Styk Fries in two years. His growing business serves fried yam with gizzard, redfish, and octopus.

Secondary school leaver who sells snacks for a living

Meanwhile, we previously reported about a secondary school leaver who makes a living as a snacks seller.

Prince stated, in an interview, that this is not the first menial job he has engaged in as he previously worked as a security guard, waiter, mason, driver’s ‘mate’, and shoe trader.

When asked why he has been in a business dominated by women for the past two years, the hardworking young man indicated that he picked up the ‘boflot’ trade from his mother.