She Gave Wrong Measurements: Designer Speaks Out After Client Shared Video of Ill-Fitted Outfit, Aderonke Enoabasi popularly known as Rhonkefella, recently put up a post reacting to a now-viral video of a client who ordered a two-piece ensemble and ended with an oversized outfit. 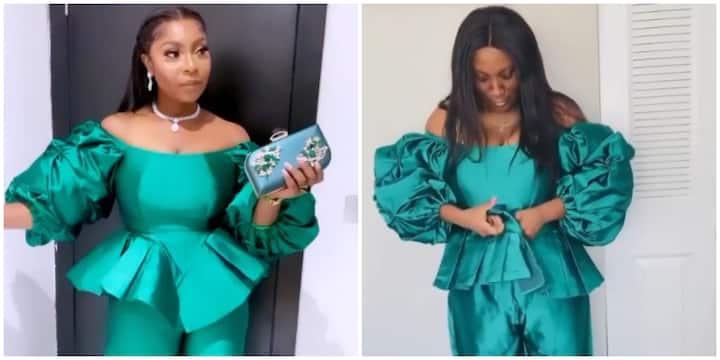 In a video shared on Tiktok, the client identified as Oyin Kemi, shared a clip of the green outfit she had ordered and then another clip of the oversized outfit she received.

Although a brief search through Kemi’s Tiktok shows that the video is no longer up, Rhonkefella came across the video and reshared it on her page as she spoke out about what happened.

Rhonkefella who runs a made-to-fit brand, explained that customers are expected to send accurate measurements which will be used to make the outfits.

However, the measurements Kemi reportedly sent in stated that she is a UK size 20/22 if converted to Uk sizing.

Rhonkefella explained that having seen the trending video, Oyin falls between a UK size 14/16.

She went on to state that Kemi never called their attention to the oversized fit she received, insinuating that she didn’t complain because she knew her measurements weren’t accurate.

“So the question is why go ahead and defame the brand? What hurts is she didn’t state that she gave a wrong measurements while posting this. This video has been circulating tiktok. And now Instagram. Making it seem as the brand Rhonkefellacollections intentional gave her the wrong size which wasn’t the case. Don’t listen to everyone. Some people will claim they sent measurements. Just like her. But it’s inaccurate and they will never accept their responsibility. A lot of humans don’t like to either be held accountable and it’s sad.”