She Has Cried Well: Reactions as Tega Makes First Appearance After Deleting Instagram Page Over Mental Health, Since Tega’s exit from the Big Brother Naija house, she has been constantly trolled for misbehaving on national TV despite the fact that she is a married woman. 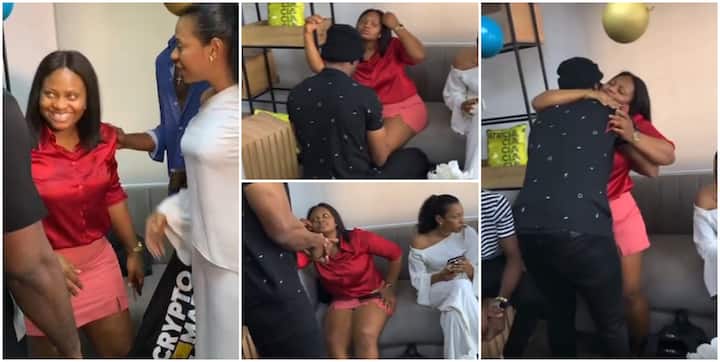 Few weeks after she left the Shine Ya Eye house, she took to social media to lament over how she has been judged by people and the effect it has had on her mental health.

In a video that has made the rounds on social media, Tega was spotted in the company of other housemates at a gathering/small party thrown for them by one of the sponsors of the show.

She sat on her own as other housemates talked and finally had a smile on her face when Cross moved over to give her a hug and engaged her in a conversation.

The mum of one did not go extra with her appearance as she simple rocked a casual outfit without any makeup on.

In another clip, she was seen having a conversation with some of her colleagues, Boma was also spotted.

However, the moment the camera moved closer to the group, Boma uietyly moved away.

“See ehh cross is the best thing this year. I don’t stan nonsense.”

“Tega looks like she’s been crying. Baby girl cheer up.”

“Tega looks like she needed that hug cheer up baby girl, and she’s so beautiful.”

“Please how can we get a brand to sign Tega. She needs to get out of this exhausting low moment.”

“She over expected and over exaggerated her fame and importance. I wish her all the happiness she deserves!”

I Found Him on Instagram and Liked His Photos: Beautiful Nigerian Lady Shares How She Got Her Husband