Husband of Bride Buried on Her Wedding Day Says She Saw Her Death Coming, Shares Details in Touching Video, On a day scheduled for her white wedding, a 22-year-old lady identified as Mutoni Uwase kenia was committed to mother earth in an emotional burial ceremony – she was buried on Friday, March 3, 2022. 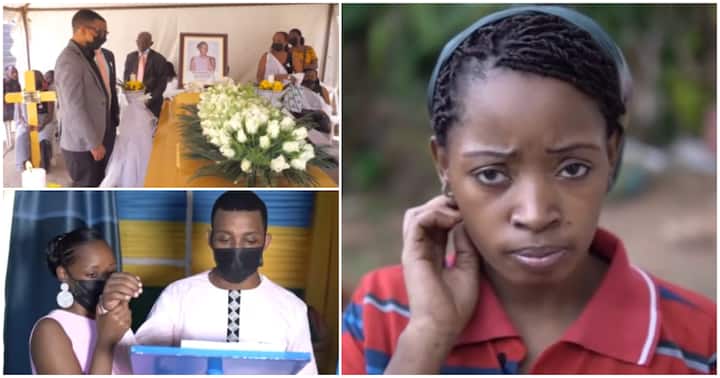 Kenia needed a second surgery to unblock her fallopian tube but couldn’t go through with it as she and her husband lacked the financial wherewithal.

Jack and Kenia’s love story was birthed on social media platform Facebook. According to Afrimax, the two became friends on Facebook and eventually saw each other one certain day.

But Kenia was shocked as she found out on their first meeting that Jack, an ex-footballer, was paraly*zed on the right side. Though he had told her on Facebook that he was sick, she didn’t expect it to be that serious.

She was already in love with him on social media but left him in annoyance upon her discovery.

Kenia would later return to care for him and stay for a few weeks. This is as he couldn’t do anything on his own. Weeks turned into months until she moved in with him.

Afrimax aired their story and the couple were able to get money for their court wedding thanks to donations from good-spirited individuals.

Kenia and Jack were not in the best state of health

As they prepared for a white wedding days after the court wedding, Kenia fell ill and was said to have been rushed to the hospital where doctors revealed her ovary was in a bad shape coupled with the fact that she had a blocked fallopian tube.

The couple couldn’t raise money for a second surgery after the first and the young lady eventually gave up the ghost days to her white wedding.

At the funeral, her husband wept. Jack told Afrimax that his wife saw her death coming but he failed to read the signs.

“I remember the last time we were together in the house. She was holding me so tight and kissed me a lot but she couldn’t talk. That was when I was going to rush her to the hospital.

“She wanted me to turn and look at her. I looked at her and held her so tight, but I didn’t know what it was.

“She was showing me signs that she was feeling a lot of pains,” an emotional Jack said.

“This is so heartbreaking, I remember watching the last episode and my heart was warmed, I was happy for them, she had such a huge heart and she genuinely loved her husband, may God grant her husband and their families’ hearts to bear the grief, rip beautiful.”

“This story broke my heart in so many ways.

“I wish I could donate something to help but I myself am getting evicted and about to be homeless. Not only did Covid cause me to lose my job but I contracted the virus and was very sick and I haven’t been the same since.

“I’m not giving up tho! I believe in Jesus and he will provide what I need to survive! God bless this man and his wife’s family and friends as well. I pray for peace and joy to fill their hearts once again!”

“Jack is a strong man and he will overcome this phase. God is there to see him through the difficult times…Their story is a remarkable one of true love and care. May the soul of Kenia rest in eternal glory. This is so touching and demonstrates real love of two people determined to live together beyond challenges. I wish jack quick healing.”

Priscy at 21: Fans slam celebrant’s friend, accuse her of overdressing