She suffered for us: Kids join hands, build their mum big house as birthday gift

Children Join Hands Together, Change Their Mother’s Status, Build Her a Very Big House As 52nd Birthday Gift, Levels have changed for a Kenyan woman who suffered so much to raise her kids as the children have started paying her back. 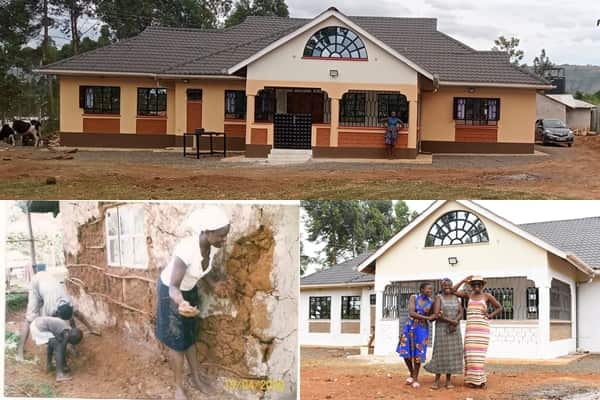 One of her children, Brenda Mulama, shared the story of how they decided to build their mother a house as a birthday present. The house, a beautiful bungalow, was planned and completed within two years.

Why we built our mother a house

The gift is so big that it has warmed the hearts of many people on the internet. Her daughter, Brenda, wrote while sharing the story on LinkedIn:

“My mom turns 52 today. The below was our 50th birthday present for her. We began the project when she turned 50 and completed it in December 2021. I am the firstborn to my mother. She gave birth to me while a teenager.

“Her mom technically forced the daughter to get married as the circumstances in which she became pregnant were not a factor. Having been a single mom in the 70s and 80s and strongly criticized and judged, marriage was the only answer for the teenage daughter.”

Mum worked hard to care for us

Brenda said her mum worked hard, sweating to feed them with her little salary earned from casual work. She continued the touching story:

“Life was tough! Mom was a casual labourer at Kakuzi Limited Nandi-hills. Her salary was mostly around Ksh. 3,000 (N10,000) and when she has worked overtime around Ksh. 16,000. First forward, it has been a journey of sweat, tears, and character development! Cheers, to change. Happy birthday, Mom!”

Many social media users took to the comment section to appreciate Brenda and her siblings for their kind gesture towards their mother. Here are a few of the comments:

“What hard work can do. But more importantly, what trusting and believing in the amazing works of God can do. This is a beautiful testimony. Your family is destined for even greater things in life. Keep on keeping on Mulama Brenda.”

“Waoo! This is not just a story or life experience, this is really encouraging and empowering. Thank you for sharing.”

Mercy Johnson blushes as hubby gives her box of money, other gifts for Valentine