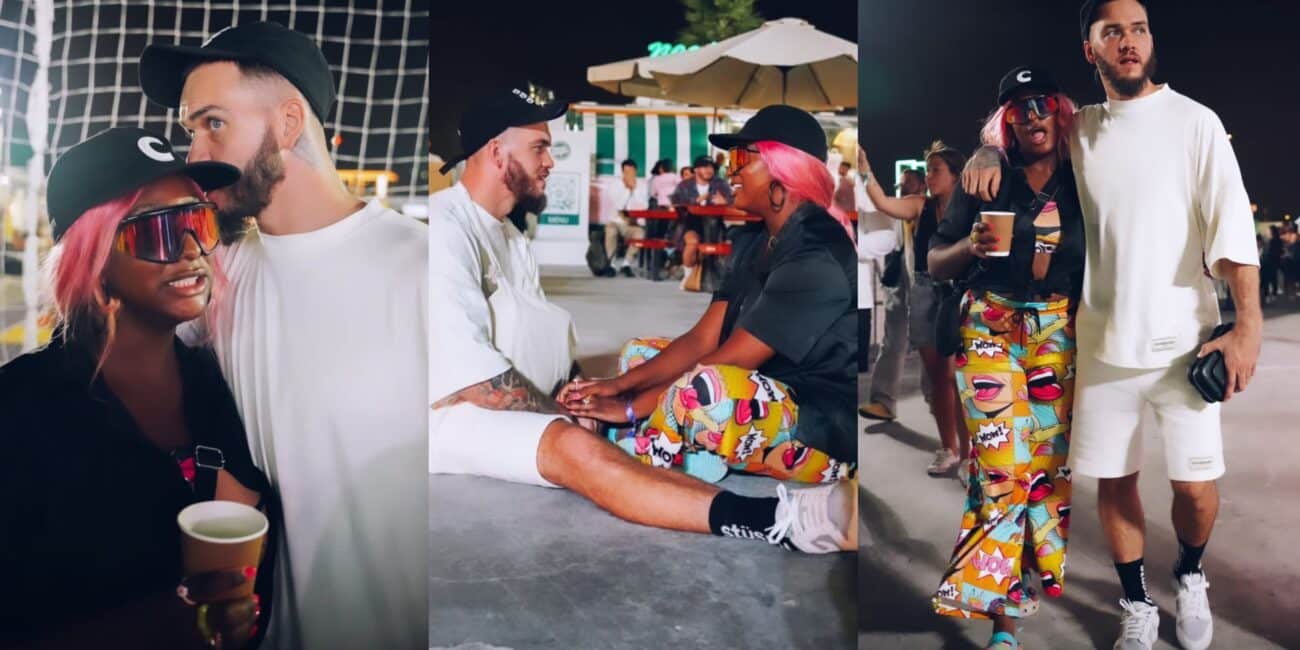 DJ Cuppy has set the tongues of Nigerians in motion after she made a shocking revelation about her relationship.

KFN reported hours ago that DJ Cuppy disclosed that she met her Fiancé, Ryan Taylor, only 25 days ago.

According to her, they met at Gumball 3000 driving rally in Dubai and her world changed.

“I can officially announce that I’m engaged! Only 25 days ago during @Gumball3000 driving rally, I met the love of my life.

I love you deep @RyanTaylor”.

The association of online inlaws are definitely surprised at the shocking revelation about DJ Cuppy’s relationship. While many are of the opinion that she is in a competition with her younger sister, Temi Otedola; others foresee the wreck of the relationship.

nellynells wrote: Online in law have closed for the year.

king theo wrote: Sometimes 25 days can be like two years when you in love, them no Dey advice person wey dey in love oo.

Call me damy wrote: Them no dey advice woman wey dey in love

Jam Sheila wrote: Cuppy u are making this thing look more like a joke..just stop pls

Ifunanya_official wrote: So I can still get married this December.

helmaqueen1 wrote: I use to think this girl was smart. I’m not saying she should live him oh but I think she should have just kept quiet

Victoria wrote: She will learn the hard way

stanbnx wrote: People will agree with everything they heard about you as long as its negative but once it’s positive they would want to question it.

Iam_rayberry wrote: 25 days is a very long period for just engagement. Try to add pregnancy to it within 30 days

Owambespicey wrote: The colour for the asoebi for CUTAY2023 is Anaconda pink for the ladies and Wallgecko Pink for the guys…..if you are interested biko send a DM

Mayschills wrote: Congrats. Can we serve cold zobo sorry juices and smoothies at the wedding? Most will be PINK promise

Funkeyi wrote: I think she just wants to be with someone so bad… to have what her sister has. As a sweet girl I hope it works out well for her even tho it has all the red flags.

Don wrote: When you are rich and have less worries, amnesia is inevitable sometimes. Pele Omonla!

Bibi Chukwu wrote: My dear, do what is best for you. Social media will have you explaining the most private information about yourself. We didn’t know she met her him 25 days ago.

Martins wrote: I celebrate CUPPY. You did your own thing, you didn’t COPY anybody. With your smooth sense of Fashion, you don’t need another Taylor now you have Ryan. Dear Naija Ladies stay true and original because even DJ CUPPY didn’t COPY.

Obia_nuju wrote: Lol.. She’s trying so hard.. But God bless her home, she’s one happy girlie and she deserves all the happiness life can give

Bellavio: Oh so basically, he was Fiona’s man and they probably broke up because of you or because things didn’t workout. It makes a lot of sense now. Regardless, hope things workout smoothly for you cuppy

KFN reported on Friday night, November 19th, that Cuppy had said yes to her boo.

Videos and photos of her engagement by her white boyfriend surfaced online with several congratulatory messages.

Cuppy was seen in the video hugging and kissing him after he popped the Will-You-Marry- Me question to her on stage.

DJ Cuppy said ‘Yes’ to the question, which was followed with passionate kisses on stage.

The audience were seen clapping and screaming in the excitement at the good news.

Ryan Taylor exposed for being involved with another woman

However, the couple’s engagement was met with scandal as the association of online inlaws dug up videos of Ryan Taylor being involved with another woman, weeks before their engagement.

According to the videos on social media, Taylor was spotted with UK influencer, Fiona Michelle, shortly before the news of his engagement to DJ Cuppy.

Fiona had posted a TikTok video in November with a mystery man whose tattoos matched that of Taylor.