Singer Wizkid used as topic of discussion in US university, video goes viral

Photos, Videos Go Viral As Singer Wizkid Is Being Studied in US University, Nigerians React, Grammy-winning Nigerian singer, Wizkid, has once again given his fans a reason to brag after a recent feat that made the rounds online. 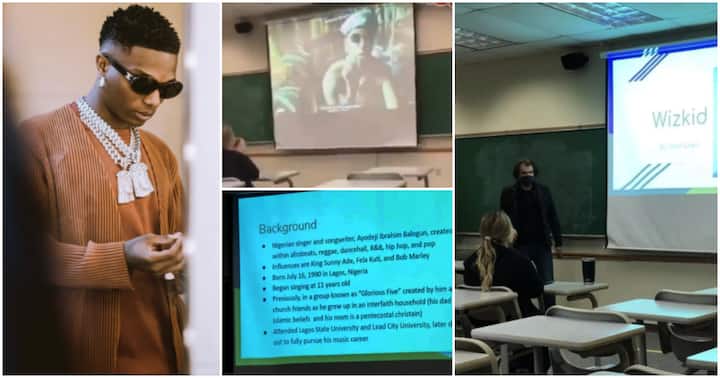 Videos and photos trended on social media showing the moment Wizkid was being studied at a university in America.

In the clips, foreign students gathered in a class and looked at a projector where Wizkid’s life and career was being dissected.

One of the singer’s hit songs, Essence, was also played in the class as the student studied Wizkid’s background and more.

The news of Wizkid being a topic of discussion at an American university left a lot of Nigerians in awe. The singer’s numerous fans also made sure to brag about it.

“Let’s forget our favorite dis or dat. Do you knw what this means? Wizkid being a subject for music study isn’t a retired musician ooh. G.O.A.T .”

“My music travel no visa .”

“Must be a proud moment for all wizkid fc.”

Couple use BRT for pre-wedding photoshoot, young man says that’s where they met