Woman Creates School for Her 3 Kids at Home, Teaches Them by Herself, Photo Stirs Reactions, A young mother, Laine Bradley, has shared her parenting experience on Twitter and people are amazed about it all. 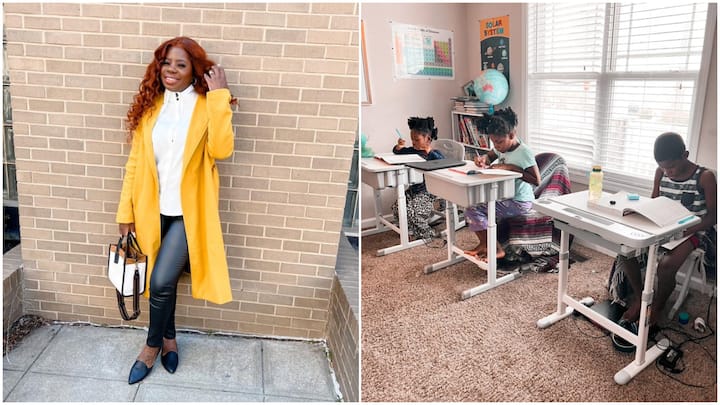 In a tweet on Wednesday, March 30, the woman revealed how she has been homeschooling her three kids.

They can wake up any time

The woman said that, unlike other kids who go to schools out of the home, her kids are allowed to wake up anytime, sometimes at 10:30 am.

On the same Wednesday, the children ate their breakfast, wrote things in their journals, played monopoly before settling down with their schoolwork for the day.

She stated that after those series of activities, they would eat lunch and play outside. On the schoolwork they would be doing for the day, she said:

“Today we are working on subtraction, long division, rounding by hundreds, cause and effect in stories and penmanship.”

Homeschool schedule for the day.
They wake up when they are ready. Today it was 10:30. They ate breakfast, journaled, went over their affirmations cards, and played a round of monopoly. They are going through their school work, will eat lunch & jump outside on the trampoline. pic.twitter.com/2XR0aVhrov

“Word of advice from someone that was homeschooled 1-12th we actually don’t like being homeschooled.”

“Imagine going through your childhood waking up whenever you feel like then becoming a adult and finding out you can’t just wake up when you feel like it.”

“How do you ensure that they get the most up-to date and comprehensive learning materials? Do you work with qualified people in these fields and then do the teaching yourself?”

“‘They wake up when they are ready’ almost had me jumping out of my chair bc YES. Nobody is ready to learn before the sun is up. Nobody.”

Korra’s ex-hubby says kids are being kept from him, shares reason for divorce