Tiwa Savage Goes on Her Knees As She Greets Burna Boy’s Mom at Concert in Manchester, Gets Cute Peck From Her, Nigerian singer Tiwa Savage has won the hearts of social media users after she was spotted in a video making the rounds. 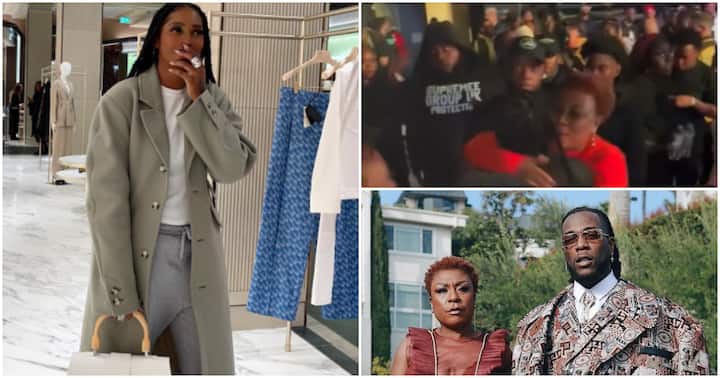 The singer was among Nigerian stars who performed at the Coko Festival in Manchester and a clip captured the moment she paid her respects to a colleague’s mother.

From indications, Tiwa had just finished her performance and on her way backstage she came across Burna Boy’s mother and manager, Bose Ogulu.

Without thinking twice, the My Darling crooner took to her knees as she paid her respects to the older woman.

This was followed by Bose helping Tiwa back on her feet before they locked arms in a passionate embrace. Burna’s mum also gave Tiwa a quick peck on the cheek before she left.

“Before nko old age is not your mate.”

“It’s the culture if not that these children of these days don’t have respect anymore, it’s normal to knee, sleep or prostrate for your elders, it’s the culture.”

“See the ntorr like a small girl, she’s too adorable.”

She has always been on her lane: Nigerians hail 2Baba’s third baby mama Sunmbo