Gail and Kabelo Mabalane Believe They’re a Match Made in Heaven As They Share Their Love Story, Kabelo and Gail Mabalane have been going strong for almost a decade in their marriage. When Mzansi thinks of a dynamic duo, there is no doubt that these two celebs will pop on the list. As they celebrate a milestone in their marriage, here are a few things about the lovely couple. 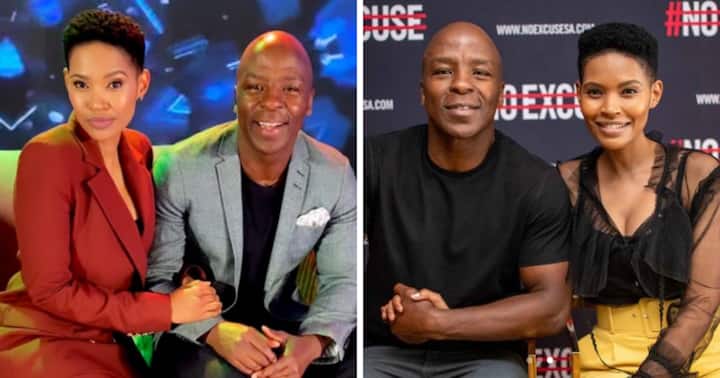 Gail Mabalane met her the former TKZee member at a friend’s home cell group. Gail was reluctant to attend the cell group but was later persuaded by a friend.702 reports that the couple’s strength in their faith brought them together from the early days. Gail says what initially attracted her to Bouga Luv was his dedication to the church. Speaking about their first meeting, she said:

“He always makes this joke that I was home delivered to him.”

After hitting it off in the church group, Kabelo and Gail made the decision to get married back in 2013. IOL reports that the two got married in a private ceremony that was only attended by family, close friends and a few famous faces. Little did they know that they would one day become one of Mzansi’s power couples.

Along came the babies

Kabelo and Gail share two beautiful children together. Their firstborn was welcomed in 2015, a little girl named Zoe Leano Mabalane. News24 reports that their younger child, Khumo Kableo, was born a few years later in 2019.

Gail and Bouga Luv are very open about the challenges they face in their marriage. The couple often boasts about the beauty of imperfect love. News24 reported that during a gender-based violence campaign, the two celebs opened up about facing tough issues in marriage. Kabelo said:

“Our marriage from the onset has been a platform and an environment conducive to talking about serious, hard issues. My wife has had to call me out on certain things and behaviours and we have had to deal with issues head-on.

“We are open, honest and we communicate, and it hasn’t been an overnight process. But we had to teach each other.”

In 2019, Kabelo was ordained into the Rema Bible Church. The Citizen reported that the Kwaito musician was on a mission to change his life around and inspire the youth. Kabelo opened up about drug abuse in his youth. He has since used his faith to help him stay on a path that serves God.

The Mabalanes are successful in their own right

Gail Mabalane has her own budding career away from her husband’s fame. The celeb is an actress, model, philanthropist, singer and businesswoman. Buzz South Africa reports that in 2005, Gail finished in the Top 5 of Miss Teen South Africa.

From there on, she was a Top 10 finalist in the sixth season of Idols SA. In more recent years, one of Gail’s most popular roles is on the Netflix drama series, Blood & Water.

Apart from his successful music career as a member of TKZee and achieving the same success in his solo career, Kabelo Mabalane has done a lot to help those in need. eNCA reported that the musician ran from Johannesburg to Durban in an attempt to raise R6 million to feed 10,000 starving children.

The long-distance run took a total of 17 days to complete.

Together, the Mabalanes have achieved such great things for their communities and their personal careers. As they celebrate nine years in their marriage, Mzansi can only sit back and watch to see what else Gail and Kabelo will cook up.