Toyin Abraham and Oluwaseyi Edun, 4 Other Nollywood Actresses Who Married the Same Men at Different Times, In the last couple of years, a number of Nollywood celebrities have flaunted their relationships and married partners on social media with fans gushing over their enviable love life. 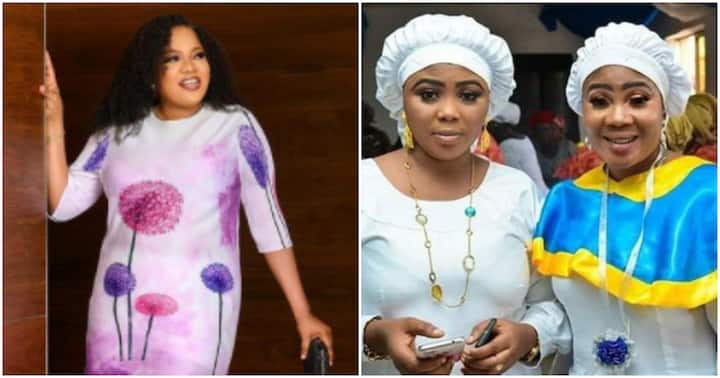 Some of them love to keep their love life on a low, others are proud to flaunt them online no matter the controversies that surrounded it.

In this article,we takes a look at some of the popular Nollywood actresses who have married or been in a relationship with the same men at different times of their lives.

Many might blame it on infidelity on the part of the men but the reality is, these favourite Nollywood actresses had to be with the same man at some point in their careers.

Toyin got married to Johnson after they met at a movie set in 2013 but the marriage was short-lived as they got divorced 2 years after.

Johnson found love in another actress, Edun, the same year he got divorced from Toyin, and many felt she had been there all along.

Nollywood actresses, Atinuke and Wunmi Ogungbe are married to actor, Segun Ogungbe and parade themselves as besties.

Their husband has cleared rumours that his home is not peaceful with his women.

Check out his birthday wishes to them below:

Ace Nollywood stars, Doris Simeon and Stella Damascus were married to the same man at a point.

Doris was initially married to Daniel Ademinokan whom she had a son for.

Their marriage ended in 2013 and the movie producer started going out with Stella the following year before they admitted to being married to each other.

Daniel eventually stated his reasons for the decision.

Saidi and Funke both dated for a long time even while Faithia was married to him and had two kids.

Funke had earlier stated that she doesn’t believe imarriage.